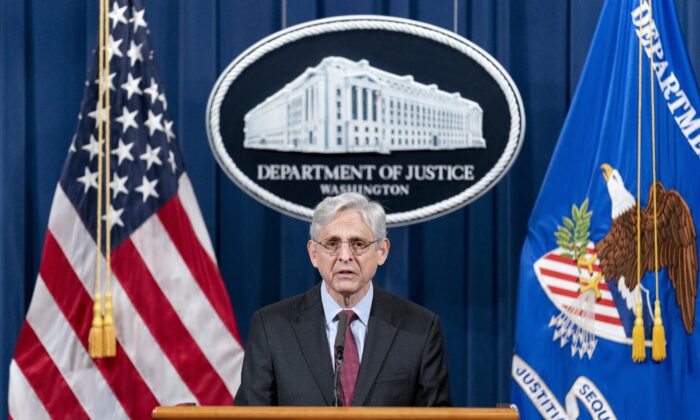 Commenting about the FBI executing a search warrant on former president Donald Trump’s Florida home, which he approved, Attorney General Merrick Garland said: “Faithful adherence to the rule of law is the bedrock principle of the Justice Department and of our democracy. … All Americans are entitled to the even-handed application of the law, to due process, and to the presumption of innocence.”

None of this applies to the way the Department of Justice, the FBI, and most of the media have treated Donald Trump.

From the Steele Dossier, Russia “collusion,” the labeling of Trump as a Russian “asset,” the Mueller Report, and the refusal by the Biden administration to enforce our immigration laws, the Justice Department in this administration has done just the opposite when it comes to equal application of the law and due process.

Whatever one thinks of Trump’s character, he is entitled to the same presumption of innocence as any other American. Trump always suffers from a presumption of guilt. He is forced to continually prove he is innocent of charges, often made by “sources” who leak information to anti-Trump media, or must explain himself to hostile Democrats (and a few hostile Republicans).

The specter of armed federal agents outside Trump’s Florida home is not an image I suspect many of us are comfortable with. Even those who do not like Trump and hope he does not run for president in 2024 should be alarmed at how this focus on him is contributing to what has been a long slide in the trust Americans place in our institutions.

In 1973, when the Gallup organization began polling on the subject, 42 percent of respondents had a “great deal/quite a lot” of confidence in Congress. This year that number is just 7 percent.

In 1991, 73 percent of the public had a great deal/quite a lot of confidence in the presidency. This year only 23 percent feel that way.

Confidence in the criminal justice system has reached a new low with just 14 percent coming down on the side of great deal/quite a lot. Is it any wonder with stories of woke prosecutors freeing criminals with low or no bail only to see many of them commit new crimes?

In what should be a warning to the media—a warning that has been apparent for many years—confidence in the trustworthiness of newspapers has declined from a high of 51 percent in 1979, to a record low of 16 percent today. Confidence in TV news reflects a similar drop—from 46 percent in 1993, to the current 11 percent. Perhaps some introspection by the media as to the “root causes” might be beneficial to the profession and the public.

Gallup has recorded similar declines in confidence levels for other institutions, including the church (no wonder with all the scandals and some TV evangelists still living the lifestyles of potentates as opposed to that of the One they claim to follow). It may surprise many that the police, which have been under heavy assault from various liberal groups, continue to enjoy major support. Gallup found 45 percent have a great deal/quite a lot of confidence in the police, down only from 52 percent in 1993.

No foreign power could hope to undermine the pillars of our democracy better than we are doing ourselves. Serious attention to rebuilding these and other institutions, which can lead to restoring confidence in them, is urgently required.