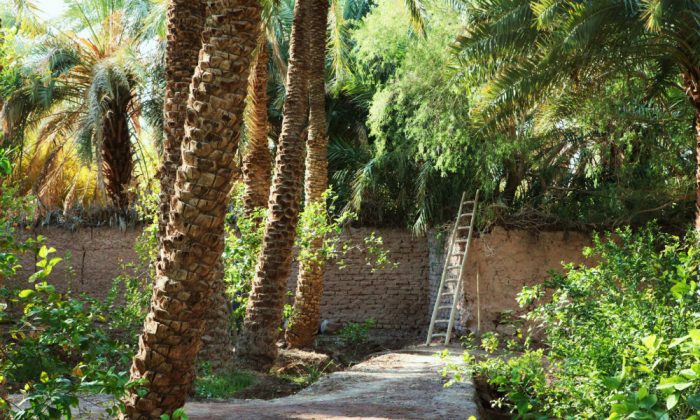 A garden in Shahdad, Iran, the city near which a site was uncovered that some say must have been home to a society of little people. (Wikimedia Commons)
Beyond Science

Is Makhunik an Ancient City of Little People?

In August 2005, a tiny mummified body was found in the ancient Persian village of Makhunik in what is now Iran. The discovery caused an international sensation when researchers reported that the remains belonged to an adolescent dwarf and that excavations of the ancient town revealed architecture that suggested it was a city of little people. The story resurfaced, following a report in PressTV in May, and made its way rapidly around alternative news sites. Here we explore whether an ancient city of dwarfs really existed, or whether it is all just media sensation.

According to The Circle of Ancient Iranian Studies, the discovery of the tiny mummy followed two months of illegal excavations in the historical fortress of Gudiz in Kerman province near Shahdad city, which dates back to time of the Sassanid Empire (224 to 651 AD), the last Iranian empire before the rise of Islam.  The mummy was seized after the smugglers attempted to sell it for more than 3 million U.S. dollars in Germany.

The 25-centimetre long mummy was well-preserved and covered by a thin layer, which was initially believed to be materials used for mummification, but was later confirmed to be the individual’s skin.  Initial analyses carried out by a forensic team estimated that the individual was 16 – 17 years old at the time of death.

The discovery quickly added fuel to rumours already in existence about a dwarf city in Kerman province, with parallels being drawn to the ‘Lilliput City’ described in Jonathan Swift’s famous novel, Gulliver’s Travels. Reports started filtering through of homes and buildings excavated in the ancient village with walls only 80 centimetres high.

The Iran Daily added to the sensation by claiming that the ancient village in which the mummy was found did not date to the Sassanid era, but was actually a 5,000-year-old ‘City of Dwarfs’.

“A significant aspect about Shahdad is the strange architecture of the houses, alleys and equipment discovered. The walls, ceiling, furnaces, shelves and all the equipment could only be used by dwarfs,” reported the Iran Daily. “After a lapse of 5,000 years since the departure of dwarfs from the city, a large swathe of this prehistoric region lies buried in soil and the migration of Shahdad’s dwarfs remains clouded in mystery.”

Archaeologists were quick to debunk the rumours of the existence of such a city in the province: “The 38-year archaeological excavations in Shahdad city deny any dwarf city in the region. The remained houses which their walls are 80 centimetres high were originally 190 centimetres. Some of the remained walls are 5 centimetres high, therefore should we claim that the people who live in these houses were 5 centimetres tall?” said Mirabedin Kaboli, head of archaeological excavations in Shahdad city.

Other experts ruled out the possibility that the mummy proves that Makhunik was a city of dwarfs, but stopped short of dispelling local legend of such a city altogether: “Even if it is proved that the corpse belongs to a dwarf, we cannot say for sure that the region of its discovery in Kerman province was the city of dwarfs,” said Javadi, archaeologist of the Cultural Heritage and Tourism Organization of Kerman province.

Several months after the discovery, Payvand Iran News reported that anthropological studies revealed the small mummy was actually 400-years-old and did not belong to a dwarf at all but to a premature baby that had been mummified through natural processes.

“The skeleton belongs to a premature baby who, due to regional conditions and its burial method, has been mummified under natural processes,” said Farzad Forouzanfar, an anthropologist of the Cultural Heritage and Tourism Organization of Iran.

So what can we conclude about Makhunik and the tiny mummy? It appears that much of the media reporting regarding the case has been spurred on by rumour and misrepresented through sensationalism. It seems most probable, the mummy is the naturally preserved remains of a baby, as anthropological studies revealed.  Nevertheless, it is curious that legends of “little people” do not just exist in Iran but can be found in many cultures around the world.

Lost History of the Little People

According to Dr Susan Martinez, author of ‘The History of the Little People: Their Spiritually Advanced Civilizations around the World’, an ancient race of people who were small in stature once inhabited the Earth. She refers to legends and stories from many cultures, such as the dwarf gods of Mexico and Peru, the Menhune of Hawaii, the Nunnehi of the Cherokee, as well as African Pygmies and the Semang of Malaysia, and draws upon discoveries of tiny tunnel networks, small coffins, low doorways in mounds, and pygmy-sized huts, as evidence of this ancient race.

While Dr Martinez’s work has attracted both criticism and skepticism, others have been more open to the idea:

“Tales and legends of the wee folk, or little people, are numerous around the world. At times they are reportedly meddlesome, but always very mysterious. Through her extensive research into the subject matter, Susan Martinez, Ph.D., establishes the little people as the progenitor of civilization and one of the ancestors of the people of today,” said researcher and author Jack Churchward.