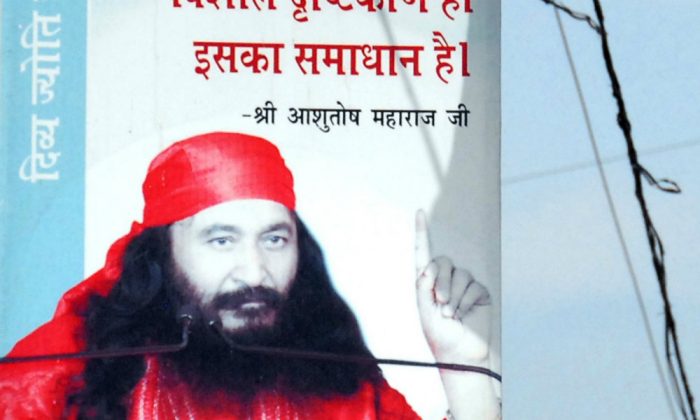 An image of Indian spiritual leader Ashutosh Maharaj stands outside the Divya Jyoti Jagrati Sansthan in Nurmahal on the outskirts of Jalandhar on March 11, 2014. (Shammi Mehra/AFP/Getty Images)
Asia & Pacific

Is He Dead or in Deep Meditation? Indian Court Asked to Rule

Indian religious leader Shri Ashutosh Maharaj is in a deep meditative state, say his followers. His wife and son say he’s dead and they want to cremate his body.

Maharaj’s body, whether dead or alive, is being kept in a freezer by his followers. Adherents to the Divya Jyoti Jagrati Sansthan faith say meditators have often gone to the Himalayas to enter deep meditation for years. They have placed his body in similar conditions so it will be maintained for him to reawaken.

The group’s website states: “His Holiness Shri Ashutosh Maharaj ji has been in deep meditative state (Samadhi) since 29th January 2014.”

Punjab police declared him dead, but retracted the declaration after a court ruled it a spiritual matter. Maharaj’s wife and son are calling for an investigation and have filed a court application. His middle-aged son said his followers want to maintain control of Maharaj’s estate, worth about $160 million, according to the Telegraph.

Maharaj did not have a close relationship with his wife and son, according to India Today. The guru had left his home in 1970.

Three disciples are also vying for succession. Group spokesperson Jaya Bharti told India Today, “Only Maharaj ji will announce his successor after coming out of his samadhi.”

One of Maharaj’s aides, who asked not to be named, told the Telegraph: “Maharaj has been in deep meditation. He has spent many years meditating in sub-zero temperatures in the Himalayas, there is nothing unusual in it. He will return to life as soon as he feels and we will ensure his body is preserved until then.”

In 2007, Discovery Channel made a documentary about a young Nepali man named Ram Bahadur Bomjon who sat in meditation without food or drink for several months.

Some teachings hold that people have sat in meditation for decades and have even been able to extend their lives beyond the normal human life span to continue their spiritual cultivation.