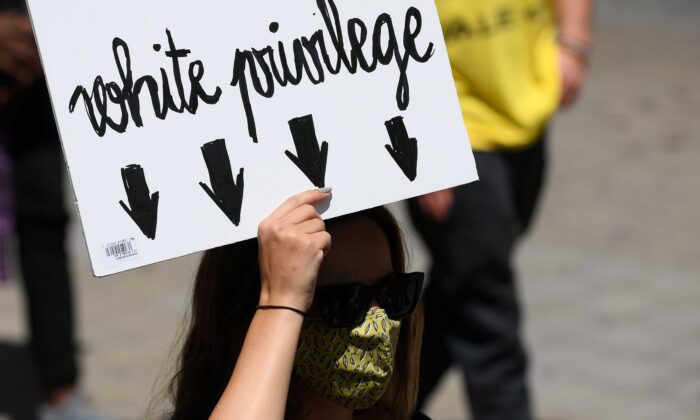 Is Diversity Our Strength? Please.

In response to a question about the Minneapolis policy to first fire white teachers before BIPOC (black, indigenous, and people of color) teachers, the Democratic-affiliated panelist replied, “Diversity is our strength!”

She would have actually answered the question if she had said, “Racism is our strength!”

This panelist was in good company with her assertion that “Diversity is our strength!” Many of our politicians robotically repeat this mantra of the left. It’s the foundation of such “enlightened” policies as maintaining a totally open border, along with the ritual denials claiming that “the border is secure.” But they love the open border, because “diversity is our strength,” and the millions of random illegal immigrants, human traffickers, criminal gang members, and drug smugglers from around the world flooding into the country just add to the wonderful diversity.

Giving credit where credit is due, Canadian Prime Minister Justin Trudeau is one of the worst offenders, repeatedly chanting that “diversity is our strength.” He sees no strength in Canadian culture, because he has claimed that there’s no mainstream culture in Canada, but that, instead, Canada is a “post-national state.” Trudeau has opened Canada’s borders to all comers, legal and illegal. He apparently thinks that there are no Canadians to respect and so no standards to maintain for who enters.

The reality of Canada is rather different from the prime minister’s imaginings. First, there are two official languages: English and French. The founder of Canadian multiculturalism, Prime Minister Pierre Trudeau, resisted demands from some minority groups to make their languages official; he didn’t think that the Tower of Babel was an example to follow. Second, there are two legal systems: French civil law and English common law. Order in Canada is based on these exclusive legal systems, although Justin Trudeau is working to introduce indigenous law as an alternative. Language and law are limited, not an endless cultural diversity.

However, the dual official diversity that we have, English and French, notwithstanding the richness of the two traditions, have proven to be a source of weakness, not strength. The greatest threat to Canada during the past 50 years has been repeated attempts at secession by nationalist parties governing Quebec, the only majority French province, motivated by cultural and ethnic nationalism. The ethnic, linguistic, and cultural sniping has been carried to the national level by Quebec nationalist parties in Parliament. How exactly is this Canada’s “strength”?

In Quebec, it’s argued that Pierre Trudeau established multiculturalism to counter Quebec’s legitimate claim to be one of Canada’s two founding cultures, and thus to be treated as an equal partner with English Canada. If correct, this means that the motivation to advance multiculturalism was to diffuse the divisive effects of the French-English diversity in Canada.

When considering multiculturalism, university students, at least the small sample I surveyed in my anthropology seminar, thought that immigrants should keep their own language and culture and not assimilate into Canadian culture. The Canadian public, however, takes the opposite view that people from everywhere are welcome to become Canadians, but that to do so is to adapt to Canadian languages and culture. In short, the Canadian public doesn’t want Canada to be a mosaic of separate cultures, but a country with shared culture and values.

“Diversity,” however, has now taken a more sinister meaning than multiculturalism. It has come to mean, under the general label of “social justice” and the government-mandated strategies of “diversity, equity, and inclusion,” a set of racial, gender, and sexuality quotas. Having decided that whites (and Asians, Christians, and Jews) and males are oppressors, and everyone else are innocent victims, “diversity” means excluding whites and males and giving preference to BIPOC individuals, females, and LGBTQ++.

In order to implement the exclusion of the majority of U.S. citizens—non-Hispanic whites at 60 percent and males at 50 percent—and Canadian citizens—80 percent white—universalistic criteria such as achievement, merit, and excellence must be eliminated. This means that people are selected for education and jobs according to non-relevant characteristics of race, gender, and sexuality. In other words, whether people selected can actually do the work is actively ignored by selectors.

One example of this is the scramble for indigenous professors by just about every English Canadian university. Anyone who convincingly claims to be of the First Nations and has some academic credentials is hired to teach aboriginal folk subjects such as indigenous justice and indigenous science. Many of those hired aren’t academically strong and would likely not be hired in a competition open to all.

Another and more serious example is the woke policies of hiring by airlines.

According to a report by Janice Hisle in The Epoch Times, a Southwest Airlines flight attendant, a Hispanic female, said, “They are compromising safety for the sake of race, gender identity, and sexual preference. … They’re risking people’s lives because of agendas.”

Many airlines have said that they will be hiring pilots on the basis of diversity criteria. United Airlines’ class of pilot recruits is 80 percent women or BIPOC.

The result of this “diversity” is that people are favored who can’t necessarily do the job well, or at all. This means that “diversity is our strength” is false in terms of actual academic and professional competence, and that the reality is, diversity is our mediocrity. And let’s not forget, diversity is also our racism.

But there’s one kind of diversity that’s very important to any vibrant civilization, and that is diversity of thought and opinion. It’s important because the search for truth requires ideas and arguments to be constantly challenged, defended, and changed by contrary ideas and arguments. Further, creativity is only possible when diversity of opinion proposes something different from the orthodox and rote opinions and approaches. Technological, organizational, and cultural progress comes through the creativity made possible by diversity of thought and opinion. It’s the “marketplace of ideas” that keeps people open and honest.

But today, the only kind of diversity that’s forbidden is diversity of thought and opinion. Universities, or the institutions that used to be universities, should have diversity of opinion as a foundational principle, as they once did. However, most universities have, in the 21st century, adopted an official political ideology that’s held as a religious truth: “social justice.” An ideology is a set of definitive and final answers to basic questions which allows no different or contrary ideas.

“Social justice” ideology is based on a neo-Marxist social analysis that describes society as divided into two classes: oppressors and victims. It justifies this on the basis of a claim that society is “systemically racist, sexist, and homophobic,” and that victims are systematically discriminated against. This largely unsubstantiated claim is justified by pointing to disparities in results in incomes, jobs, educational attainments, and so on. But not only is there no evidence of the alleged discrimination, but all of these “victim” classes have also for decades enjoyed policies that discriminate in their favor.

With this neo-Marxist, quasi-religious ideology officially promoted by the Liberal Canadian and Democratic American governments, and adopted with the enthusiasm of religious converts by the vast majority of educational and business organizations, tolerance for alternative views is nonexistent. For example, an inquiry into whether there are alternative explanations for disparities in outcomes in education and income, other than discrimination, is not only not encouraged, it’s actively forbidden.

In all institutions today, there are multitudes of “diversity and inclusion” bureaucrats, who closely resemble soviet political commissars, whose job it is to police opinion, suppress heretical views, and punish recalcitrant thinkers who refuse to bow to the official ideology. “Cancel culture” is the punishment, exclusion, and social or professional annihilation of anyone foolish enough to say a word that offends one of the preferred and protected classes of “victims” and makes them feel “unsafe,” or to deny the absolute truth of neo-Marxism, the intersectional victim grid, critical race theory, or radical gender theory. A Southwest Airlines employee pointed out that “the company is trying to eliminate anybody who does not agree with their agenda.” By now, there are “corpses” of thousands of dead heretics who were once highly trained professionals and highly educated academics.

“Diversity is our strength”? Please.