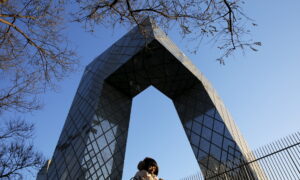 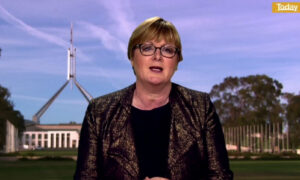 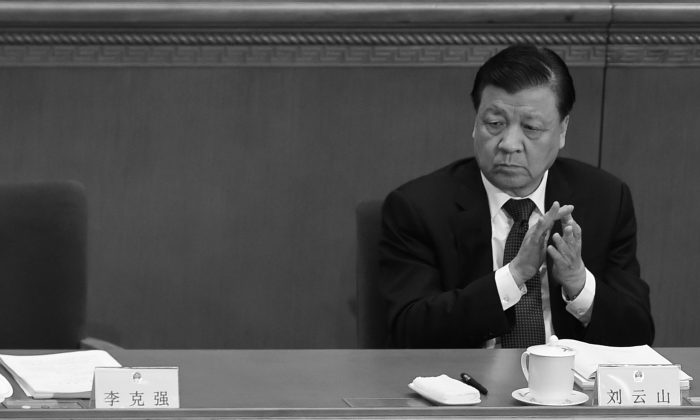 Liu Yunshan, the propaganda chief and Politburo Standing Committee member, seen in Beijing on March 5, 2016, is one Jiang Zemin’s few allies left in a senior position in the party and the last senior Chinese official to visit North Korea in several years. (Wang Zhao/AFP/Getty Images)
China

Is China’s Propaganda Chief Headed for a Fall?

The Party's anti-corruption agency's critique of the Propaganda Department, and recent political developments and rumors, foreshadow a move by Xi Jinping against Liu Yunshan.
By Larry Ong
Print

Very little has changed on the propaganda front in China fifty years from the start of the Cultural Revolution it seems—overly “red” songs are sung in prestigious ceremonial hall in Beijing, outspoken critics of the communist regime are silenced, and the Party leader appears to be establishing a personality cult.

The Propaganda Department’s leadership lacks political awareness, said Wang Haichen, the head of the discipline inspection team, in a June 3 report. The inspection team’s two-month probe of the Party’s pen also uncovered discrepancies between Party central’s instructions and what the department carries out, substandard hiring practices, a lack of robust checks against corruption, and a department that operates in an overly formal and bureaucratic manner.

The explicit indictment of the Propaganda Department by the Party’s internal police is the latest in a series of pushbacks by Xi Jinping against Liu Yunshan this year. The indictment, and recent political developments and rumors, suggest that Xi is looking to sideline Liu in the near future.

The June 3 report is an omen that a “huge political earthquake” would shake the top Party leadership, wrote the Chinese-language version of the BBC in its description of the news. “Xi Jinping’s political hindrance could be removed from his post.”

“This is a signal that the elite Chinese leadership isn’t happy with the Central Propaganda Department’s work, and that there will be a rectification of the department,” BBC wrote in the article, citing overseas commentary.

Xi has been in damage control mode ever since subtle propaganda efforts set out to besmirch him beginning in about February.

After the annual lunar new year gala hosted by China Central Television (CCTV) became an out-and-out propaganda drive that also glorified Xi, he publicly toured the headquarters of CCTV, People’s Daily, and Xinhua, the regime’s three main mouthpieces. Analysts say that Xi’s tour was an attempt to regain control over the Party’s pen.

In end February, the Propaganda Department-controlled internet authorities deleted the social media account belonging to retired tycoon Ren Zhiqiang after he made barbed remarks against regime policies. The internet authorities also issued a lengthy statement explaining their censure, an unusual move which suggested that serious action would be taken against Ren.

Foreign observers slammed Xi Jinping for clamping down on free speech. But the Party’s internal disciplinary agency merely handed Ren, a Party member, a year-long probation in May. Earlier this month, Ren returned to form in criticizing polluting Chinese firms at an environmental forum—and incurred no rebuke.

If the above dynamics can be attributed to a tense back-and-forth between Xi Jinping and recalcitrant elements in his own administration, his enemies appeared to have gone too far last month. In the wake of a Cultural Revolution-themed concert held at the Great Hall of the People that juxtaposed Xi’s image with that of Mao Zedong, Xi seems to have gone on the offensive.

In May, People’s Forum, a supplement to the People’s Daily, the official Party mouthpiece, prominently displayed on its website a survey that sought to explain the concept of “gaojihei,” a term of the internet age. The phrase refers to a kind of sophisticated means of undermining the reputation of someone by damning them with fulsome praise. Days later, a Chinese internet blogger famous for fawning over Xi and churning out nationalistic pieces with Maoist tones got censored.

Xi even banned the Propaganda Department from calling him “Xi Dada,” or Uncle Xi, according to Hong Kong newspaper Ming Pao, possibly because the term, especially when used ad nauseum, casts him as a Mao-like figure.

There are two ways to understand Xi Jinping’s recent pushback. One is that he is simply attempting to prevent his political opponents from undermining him by painting him in the image of Mao; the other is that he has no choice but to seize control of the Party’s pen, command the Party’s military, and maintain a grinding anti-corruption campaign, merely to stay one step ahead in a “struggle of life and death” with a rival Party faction.

Propaganda chief Liu Yunshan is a known loyalist of Jiang Zemin the former Party boss. Before Xi took power, Jiang allowed his loyalists in the Politburo Standing Committee—military vice chairs Xu Caihou and Guo Boxiong, and security czar Zhou Yongkang, to name a few—to have the final say on their respective portfolios. In turn, Jiang’s loyalists are committed to protecting their patron because it allows for the continuation of the political order that he oversees.

Xi seeks real control over the Party, and the only way to do that is by dislodging the Jiang power nexus. He has already purged many of Jiang’s top allies, and assumed control over the Party’s gun through a sweeping military reform. The other key Party organ, the Propaganda Department, seems to be next.

Overseas Chinese-language media have recently carried rumors that Liu Yunshan could be purged, and his Propaganda Department reconstituted.

Wang Huning, a devoted adviser to three Party leaders, has reportedly gathered four other Politburo members to demand an investigation be launched against Liu Yunshan, according to Hong Kong political magazine Chengming. Wang and the others claim that Liu had overseen “irregular organizational activities,” and failed to properly perform his duties.

Meanwhile Mingjing, a Chinese language publication that is known to traffic high-level political news, claims that Xi Jinping is looking to reorganize, and even rename, the Propaganda Department at an important leadership political conclave in 2017.

And according to sources in China, the internal Party disciplinary agency has placed Jiang Mianheng, the elder son of Jiang Zemin, under house arrest. This move is of a piece with longstanding moves by Xi Jinping against Jiang Zemin and his loyalists.

These developments, coupled with the open criticism of the Propaganda Department, do not bode well for Liu Yunshan.