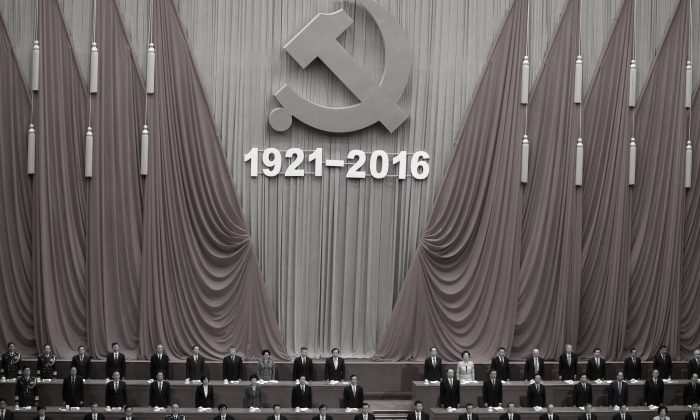 A ceremony at the Great Hall of the People in Beijing on July 1, 2016. (Wang Zhao/AFP/Getty Images)
The Dead End of Communism

China has the world’s second-largest economy and one of the biggest stock exchanges. Modern skyscrapers dot the skyline in Beijing, Tianjin, and Shanghai. All makes of cars can be found on the streets, and Chinese citizens carry the latest smartphones.

So is the People’s Republic of China actually a modern capitalist state, and communist only in name?

While the Chinese Communist Party has adopted some aspects of capitalism, China remains a textbook communist country: The Party controls all land and the “Commanding Heights of the Economy“; it maintains strict controls on speech, assembly, and belief; and the Chinese regime’s political structure is that of a classic Leninist dictatorship.

China would not have been able to enjoy stretches of double digit GDP growth in recent years if the Party had not turned away from pure socialism under paramount leader Deng Xiaopeng in 1978, when they experimented with economic reform.

Over the decades, the Party slowly relinquished some control over the means of production and allowed private enterprise and entrepreneurs. The top Chinese leadership now refers to its five-year plans as “guidelines,” in recognition that the Party no longer oversees a classic command economy.

But the Party runs what could be termed a “neocommand economy.”

State-owned enterprises may make up only 3 percent of all companies in China today, but they produce an estimated 25 to 30 percent of the total industrial output. The Party maintains command over the economy by having top Party officials or family members own several key industries. For instance, Jiang Mianheng, the son of former Party leader Jiang Zemin, is known as China’s “Telecommunications King” due to his sizable interests and control over the industry.

China’s impressive GDP growth figures are widely known to be manipulated. Li Keqiang, the current Chinese premier, told a U.S. official in 2007 that official figures are unreliable and he instead looks at railway cargo volume, electricity consumption, and new loans disbursed by banks to better gauge China’s economic growth.

And in line with textbook Marxist teachings, the Party is the only true landowner in China; the Party leases land to the Chinese people.

Chinese society continues to be tightly controlled by the Party.

The Party employs over 2 million internet police to censor public opinion and maintains a powerful internet firewall to keep out the global internet within China’s borders. Population control officers force Chinese women to stick to the state-mandated child limit and carry out forced abortions and sterilizations against women who don’t conform.

Regime dissenters, as well as religious communities and ordinary members of civil society, live under the constant threat of being declared political enemies by the Party and then “invited to tea“—code for being interrogated by public security officers. Dissidents are abused, tortured, and frequently made to carry out forced labor in detention centers.

The regime secures an almost perfect conviction rate against its political enemies in the courts, which it controls. Prominent dissidents find themselves under house arrest the moment they complete their often lengthy jail stints.

The Chinese constitution states that it guarantees freedom of belief, but the Party ignores its own laws. For instance, former Communist Party general secretary Jiang Zemin forced through the unpopular persecution of the Falun Gong spiritual practice in 1999 and created an extralegal organization to ensure that the regime’s law and security apparatus carried out Jiang’s policy.

Politically, China is still run by a Leninist Party obsessed with control.

The Chinese Communist Party has been the only governing political party since 1949; other parties exist under a “united front,” but are not independent of the communists.

The Party’s leader or general secretary doesn’t run a cabinet and is instead part of a political bureau, a collection of top officials that make all the top decisions in the country. He is also handpicked by Party elders and elites, not democratically elected.

These days, the leaders of China may have traded in their grey, five-button, Mandarin-collared Mao suits for dark business suits. But as long as the hammer and sickle remains in the Great Hall of the People, communism hasn’t yet been relegated to the dust heap of history in China.