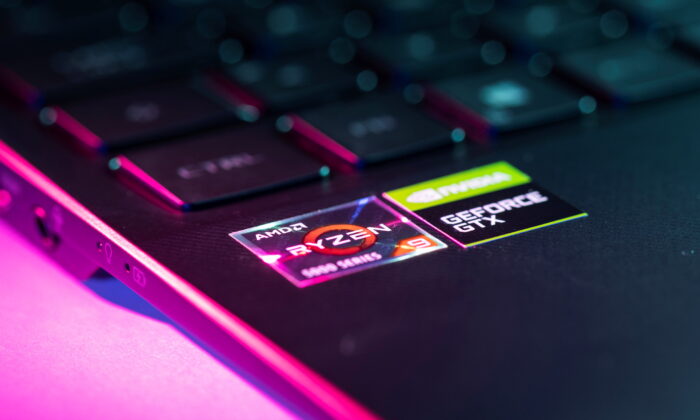 AMD and NVIDIA GeForce stickers are seen on a laptop in this illustration taken on Dec. 1, 2021. (Dado Ruvic/Illustration/Reuters)
Stocks

Is AMD Stock Prepping for Pre-Earnings Rally After Retesting This Support Level?

Advanced Micro Devices Inc. stock, one of the star tech performers of recent years, is stuck in a year-to-date rut.

The lackluster phase comes despite the company continuing to do well fundamentally.

Ever since peaking at $164.46 on November 30, AMD stock has traced a broader downtrend marked by intermittent rallies and pullbacks. It has failed to gather enough momentum to challenge the November peak.

The tremors of rate hike fears and geopolitical tensions surrounding the Ukraine war were first felt among tech stocks. AMD had a hard landing in the process and plunged to a low of $99.35 on Jan. 28, a peak-trough decline of about 40 percent in two months.

Although the stock recovered from the bottom, it has been rangebound, trading mostly between $100 and $125.

For the year-to-date period, AMD has lost about 28 percent. This compares to a more modest 19 percent retreat by the iShares Semiconductor ETF and a 17 percent pullback by peer Nvidia Corporation.

Technically, AMD stock has consistently found support around the $100 area. AMD formed a consolidation area around this level in late September, just ahead of the strong runup that culminated in the November peak.

It dipped just below $100 in late January before embarking on a mini rally. The stock retraced the upward move and on a couple of occasions in March, it stopped just short of the psychological level of $100 before taking off yet again. And as has occurred in the near past, the support area could be used by the stock as a launch pad to take the next leg.

The current down move, which came on the back of AMD’s proposed deal to buy Pensando and a few not-so-positive sell-side comments, led to the stock retesting the low.

AMD usually reports its first-quarter results in late April. Analysts, on average, estimate first-quarter earnings per share and revenues to soar by about 75 percent and 62 percent year-over-year, respectively, to 91 cents and $5.58 billion.

Investors can now at least be rest assured that any pullback in AMD stock will likely stop at $100. The average analyst price target for AMD shares, according to TipRanks, is $149.53, suggesting over 45 percent upside potential. Today’s price could be an attractive entry point for those interested in picking up the stock.