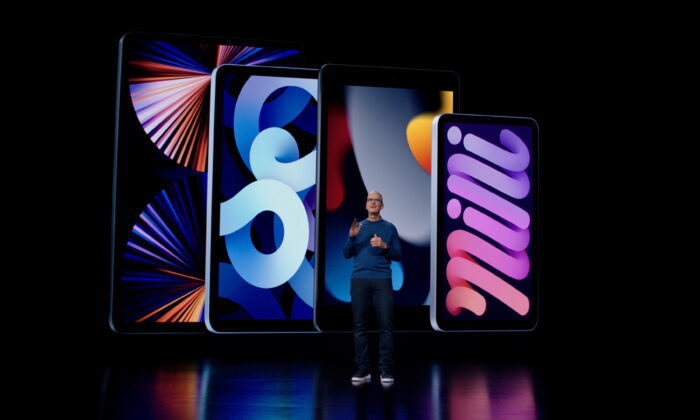 Apple CEO Tim Cook introduces the latest iPad and iPad mini to the iPad lineup during a special event at Apple Park in Cupertino, Calif., on Sept. 14, 2021. (Brooks Kraft/Apple Inc/Handout via Reuters)
Markets

Is a ‘Giant iPad’ What Apple Needs to Not Be a ‘Laggard’ in the Home Market?

A giant iPad may be the key to people’s homes for Apple Inc., according to tech journalist Mark Gurman.

What Happened: Gurman noted that the Tim Cook-led company has been “a laggard” in the home market and is behind rivals Amazon.com Inc. and Alphabet Inc.

Apple has cornered just 5 percent of the smart speaker market, as per data from Consumer Intelligence Research Partners, which Gurman cited in his latest newsletter.

On the other hand, Amazon’s Alex voice assistant accounts for 69 percent of sales, while Google accounts for 25 percent.

“Apple lacks a do-it-all home hub—a device with a screen—making it all the harder to catch up,” wrote Gurman.

The path forward could be a “giant iPad,” noted the analyst after testing Amazon’s new Echo Show 15 and Meta Platforms Inc.’s Facebook Portal.

Why It Matters: Gurman said that Apple could make “a far better” device than its rivals. A future device from Apple could eliminate flaws noted by him in Echo such as its subpar camera, thickness, sluggishness, and limited software.

“Turning the iPad into a home device won’t be as hard as inventing the original iPhone. Apple already has most of the components figured out,” said Gurman.

The device envisioned by Gurman would stretch the iPad to 15 inches, sport more powerful speakers, and have cameras that support a landscape-first orientation.

“Throw in a rear-facing power plug and wall-mount support, and you have Apple’s take on the Echo Show.”

There are two major caveats, according to Gurman. One, such device would be expensive, given the 12-inch iPad Pro starts at $1,100; in comparison, the Echo Show 15 is priced at $250. Two, Siri still needs work done to be able to properly understand users and perform other actions.

“A high price and a lackluster voice assistant won’t turn Apple into the king of smart home devices, but moving in this direction could be the beginning of a real presence,” concluded Gurman.