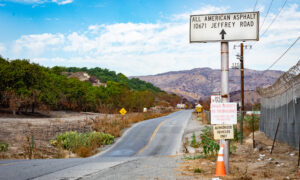 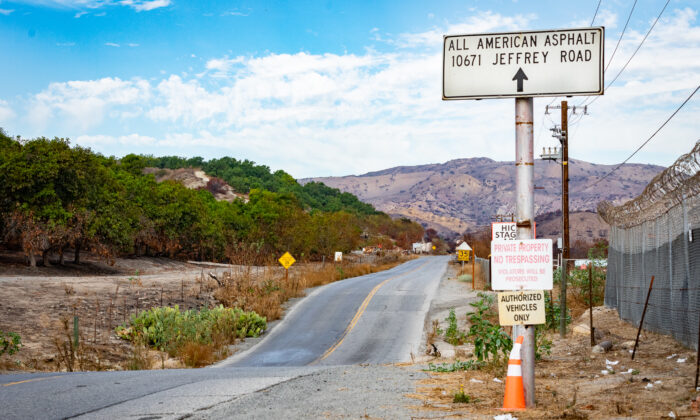 Residents of Irvine, California, were set to gather at city hall on July 28 to share concerns about an asphalt plant they say is bringing toxic emissions into nearby neighborhoods.

The meeting was arranged by Irvine Councilman Larry Agran, the only publicly elected critic of All American Asphalt, an asphalt-mixing plant in North Irvine.

Organizers said the rally was in response to a lack of council action on the subject, since the issue has failed to be agendized. In Irvine, agendizing an item requires two councilmembers, and Agran has been unable to get a second.

“For two to three years now, there has been growing complaints and serious complaints about noxious and even toxic emissions from the All American Asphalt plant in North Irvine that are affecting residents throughout a number of North Irvine communities,” Agran told The Epoch Times. “I felt that with all the widespread community concern, and without the council itself, providing a forum for presentation of those concerns would be helpful. That is the next best thing to council consideration of this matter.”

The meeting was set to feature a number of public speakers on the matter, including University of California–Irvine (UCI) advisers Dean Baker and Jun Wu, who planned to share research on how the local communities are being harmed. Dozens of middle and high school students were scheduled to talk about how they’ve been affected with nose bleeds, headaches, and more as a result of the toxins.

Kim Konte, who lives in one of the affected houses, is a member of Non-Toxic Neighborhoods, one of the organizations fighting the plant. She said the issue has become out of control, and if it goes on much longer, she and her family will be forced to move.

Konte even compared it to the Flint, Michigan, water crisis.

Critics of the asphalt plant blame the South Coast Air Quality Management District, who they say is responsible for the alleged tenfold increase of hexavalent chromium and other toxins in the air due to a 2016 mistake in which they didn’t label All American Asphalt in the AB 2588 Air Toxics “Hot Spots” program.

Because of this, they are urging the city council to remove the plant’s business license.

Due to UCI air sensors that have been loaned to the neighborhoods to measure air quality levels, Konte said they planned to share the information July 28 to show the public just how dangerous it is for developing children.

“We’re going to be sharing the percentage increases [in toxins], for example, in 2017 benzene increased by 10,911 percent,” Konte said. “That’s what we want the public to see because right now they’re unable to protect their children, because some of the most harmful and carcinogenic emissions are actually non-odorous.”

Konte said they’ve resorted to getting other elected officials to look into the matter, including state Sen. Dave Min and U.S. Rep. Katie Porter, to help the families affected.

The Orange County Board of Supervisors, all Irvine councilmembers, the South Coast Air Quality Management District, All American Asphalt, the Irvine Company, and other stakeholders were invited to the meeting.

“[The Irvine City Council] has done everything in their power to not even add this item to the agenda. Every discussion regarding All American Asphalt has been in closed session,” Konte said. “[Mayor] Farrah Khan promised to have a special meeting on this issue, and as soon as she was elected mayor, she just disappeared as far as helping us in this effort.”

In the past, other city council members have argued that the Irvine City Council doesn’t have any control over air quality issues, which are under the jurisdiction of the air quality management district. Additionally, the city has filed a lawsuit against All American Asphalt over related issues.

When asked about this, Agran disagreed, saying, “The city has many tools at its disposal. The city is responsible for health and safety in the community and to devote resources to identifying and characterizing the problem and proposing remedies. That I regard as a principal responsibility of the city. The idea that we have no jurisdiction over this is just flat out wrong.”

Other Irvine councilmembers contacted by The Epoch Times didn’t respond to a request for comment by deadline.