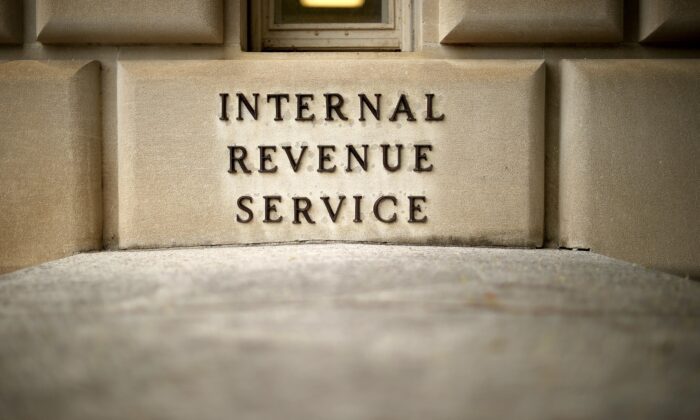 A detail of the Internal Revenue Service (IRS) headquarters building is seen in the Federal Triangle section of Washington, on April 27, 2020. (Chip Somodevilla/Getty Images)
Economy

IRS to Shell Out $1.2 Billion to Taxpayers in Forgiven Penalty Fees, Here’s Who Qualifies

The Internal Revenue Service (IRS) is sending $1.2 Billion in refund or credits to more than a million Americans who filed their taxes late in the first months of the pandemic, according to an announcement on Sept. 12.

Americans who missed the deadline for their 2019 or 2020 tax returns, and who have already paid a fine, may receive an automatic refund for late-filing penalties by the end of September.

The IRS is suspending and forgiving penalties for the 1.6 million late filers from that period who apply, as long as their returns are filed by Sept. 30, 2022, according to the IRS.

The amount of credits in the $1.2 billion refund average up to $750 per person, although some households may get more or less.

Eligible tax returns that qualify for relief include individual, corporate, estates and trusts, and others.

That gives those who plan to apply for the reprieve just over two weeks to wrap up their outstanding returns in order to take advantage of it.

“Throughout the pandemic, the IRS has worked hard to support the nation and provide relief to people in many different ways,” said IRS Commissioner Chuck Rettig.

The IRS’s decision is a move to “help struggling taxpayers affected by the COVID-19 pandemic,” said the announcement.

The pandemic has had an “unprecedented” effect on its operations, said the tax agency, which noted its role in distributing federal stimulus payments to struggling taxpayers during the pandemic.

People who happen to file their tax returns late without requesting an extension can normally expect to face a penalty of up to 5 percent of unpaid balances per month, which is capped at 25 percent of the amount of taxes that they owe.

According to an official notice, the late-penalty relief will allow the agency to “focus its resources more effectively,” allowing it to return to “normal operations” for the 2023 filing season and alleviate the workload.

The federal tax service said that it has been “working aggressively” to process a massive post-pandemic backlog of paperwork consisting of unprocessed tax returns and taxpayer correspondence.

According to the IRS, there were 8.2 million unprocessed individual returns filed in 2022, including 6.5 million paper filings, which need to be whittled down.

The IRS said that the relief does not apply to taxpayers who have already filed their returns.

This move comes after the tax agency was facing massive criticism over the backlog of unprocessed tax returns, despite promises from the agency that the issue would be resolved before December.

The IRS said that most of the refunds will be delivered by the end of September.