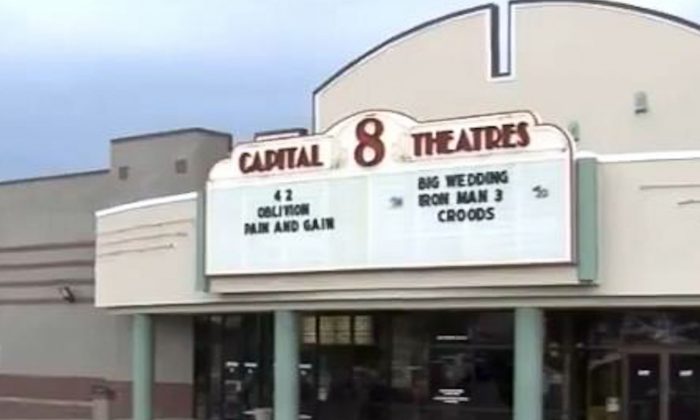 Goodrich Capital 8 Theaters in Jefferson City, Mo., where a promotion for "Iron Man 3" scared instead of entertained customers in early May 2013. (Screenshot/ABC17News.com)
Entertainment

Iron Man stunt goes wrong: Actors dressed up with fake guns entered a Montana theater as part of a stunt promotion for Iron Man 3, but some theatergoers were scared instead of entertained.

A cosplay group—cosplay is short for costume play, a type of subculture in which people dress up and act like fictional characters—entered Goodrich Capital 8 Theaters during the opening weekend of Iron Man 3 at the beginning of May. The group was dressed as S.H.I.E.L.D operatives, members of a fictional intelligence agency featured in Marvel Comics stories.

They were carrying guns, and recalled for some the Aurora, Col., attack last year during which a gunman dressed in body armor opened fire at a showing of The Dark Knight Rises.

John Morlock is a retired army war veteran who suffers from post-traumatic stress disorder. He told ABC 17 News it disturbed him to see one of the actors entering the theater.

Capt. Doug Shoemaker of Jefferson City police told ABC 17: “Everything is in place: it’s the opening night of a superhero movie, somebody walking in in all dark clothes, … carrying a rifle. Everything points to bad things that are about to happen.”

The theater issued an apology on its Facebook page on May 10: “We apologize and are sympathetic to those who felt they were in harm’s way with our character promotion for Iron Man 3. This was not a publicity stunt. We have worked with the Cosplacon group on many movies to dress up and help entertain our customers. … Going forward we will take the necessary steps to make sure this doesn’t happen again. Security and safety for our customers is our number one priority.”