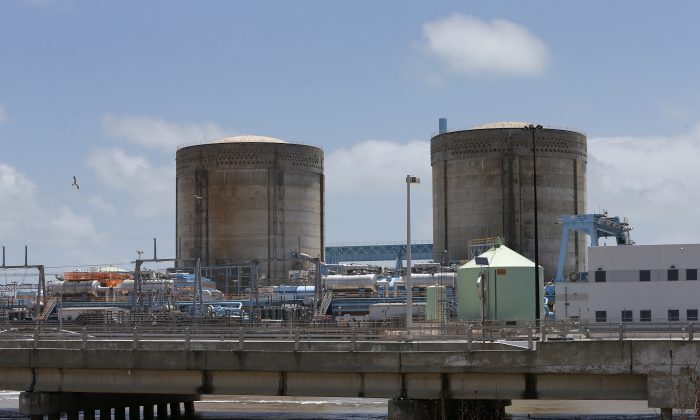 A general view of the Turkey Point Nuclear Reactor Building in Homestead, Florida May 18, 2017. (RHONA WISE/AFP/Getty Images)
US

The record-breaking Hurricane Irma moves toward Florida, forecasted to reach its coasts as early as Saturday. Right in its estimated path stand two nuclear power plants—Turkey Point and St. Lucie.

Both plants sit right on the coast where the strongest-on-record Atlantic hurricane is expected to hit.

This, however, is not the first hurricane the plants have weathered.

In 1992, Turkey Point withstood Hurricane Andrew, a Category 4 storm and one of the strongest the country has experienced seen. The plant sustained $90 million in damages and had to run on backup generators for more than five days. Its access road was blocked, communication systems shut down, and fire protection system damaged. The exhaust stack of one of its oil-powered units cracked.

Yet the reactors, shielded by six feet of steel-reinforced concrete and 20 feet above ocean level, remained unscathed. No radioactive material leaked, according to the Federal Nuclear Regulatory Commission.

The St. Lucie plant, located further north along the eastern coast, has also weathered powerful storms, like Frances in 2004 and Wilma the year after. But none of them have been quite as powerful as Irma is expected to be.

Irma as a Category 5 storm hammered the British Virgin Islands and reached Puerto Rico on Wednesday, while the Dominican Republic, Haiti, and Cuba brace for its impact. Irma is expected to weaken to Category 4 strength by the time it reaches Florida, where the areas at risk are already being evacuated.

Neither of the nuclear power plants have shut down ahead of Irma, although they may later.

“If we anticipate there will be direct impacts on either facility, we’ll shut down the units,” said Peter Robbins, spokesman for the operator of the plants, Florida Power & Light, according to the Miami Herald.