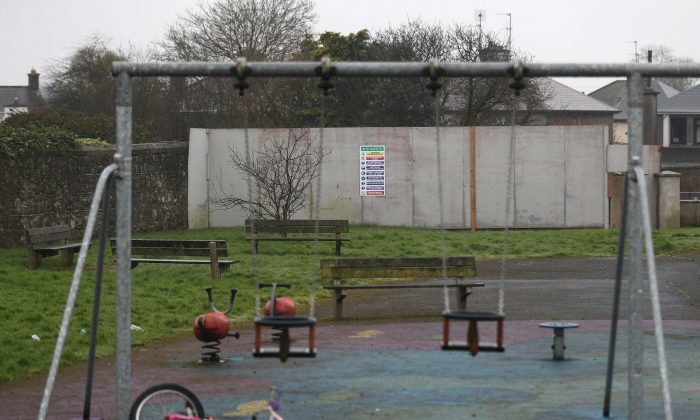 A children's playground now occupies part of the site of the former mother-and-baby home run by the Bon Secours nuns in Tuam, western Ireland, on March 7, 2017. (Reuters/Peter Nicholls
Europe

DUBLIN—Ireland’s government on Oct. 23 approved the exhumation and reburial of the decades-old remains of hundreds of babies left in unmarked graves at the site of a former church-run home for unwed mothers in the western town of Tuam.

Findings last year by an official inquiry that “significant quantities” of remains were stored in underground chambers horrified Ireland, reviving anguish over how women and children were once treated at state-backed Catholic institutions.

Almost 800 children could be interred in the grounds, according to a local researcher who first brought the issue to light in 2014 by comparing the number of death certificates issued to recorded burials at the site.

The infant mortality rate at Church-run institutions was significantly higher than in wider Irish society at that time, with death certificates mostly blaming infections like measles, gastroenteritis, bronchitis, tuberculosis, and pneumonia.

Relatives have alleged the babies were mistreated because they were born to unmarried women.

“Every effort will be made to locate and recover all juvenile remains from the site,” Children’s Minister Katherine Zappone told a news conference, saying the testimonies of relatives who had lost relatives at the home will live with her forever.

“I am committed to ensuring that all the children interred at this site can have a dignified and respectful burial.”

Run by nuns from the Bon Secours order, the home operated from 1925 to 1961 and was demolished in the 1970s. Remains dated from between 35 fetal weeks and 3 years of age were found at the site, which is now an estate of low-rise, modest homes.

‘Give Them a Proper Christian Burial’

Earlier this month, Peter Mulryan, a man in his 70s who lived in the home until he was 4, said he believes his sister may lie buried among the bones of babies and toddlers.

“I’ve a sister in that septic tank in Tuam and I want her, and the rest, out of there for a proper DNA test and to be handed back to their siblings,” said Mulryan.

“We want to give them the proper Christian burial they were denied.”

Kevin Higgins, a lawyer who has acted on Peter Mulryan’s behalf, called for an inquest and post-mortems to determine how the children in the Tuam home died.

“The government has set its face against an inquest into the cause of death of each individual child. They do not want the truth to emerge. From those remains, there will be evidence, even now, of maltreatment and neglect,” Higgins said.

The Church’s prestige and authority have been greatly diminished over the past three decades by a series of scandals over pedophile priests, abuse at Magdalene laundries, forced adoptions of illegitimate babies, and other painful issues.

During Pope Francis’s recent visit to Ireland, where he begged forgiveness for the multitude of abuses suffered at the hand of the church, he was handed a letter by Zappone calling for a substantial contribution to the cost of action at the site.

She said on Oct. 23 that the Vatican had not yet responded but that the Bon Secours order had offered a voluntary contribution of $2.9 million toward the costs.

Described as a “chamber of horrors” last year by then prime minister Enda Kenny, excavating the site would not be easy, Zaponne said, first requiring legislation and then a phased approach that she was unable to put a timeline on.

She also said that Ireland must prepare itself for “further truths to come to the fore” next year when a wider inquiry into the so-called “mother-and-baby homes” reports on institutions where tens of thousands of unmarried pregnant women, including rape victims, were sent to give birth.