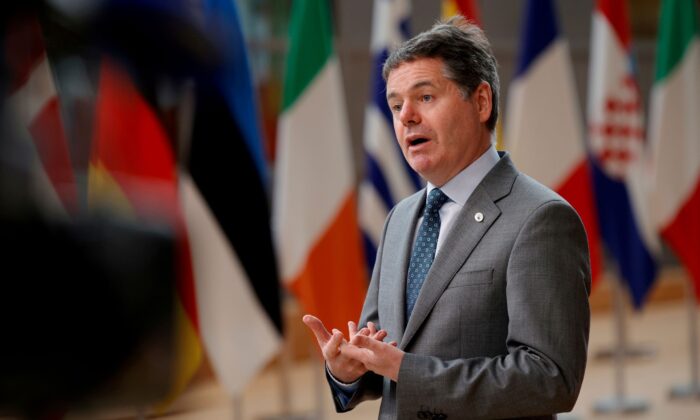 Eurogroup President Paschal Donohoe talks to journalists as he arrives for the second day of an EU summit at the European Council building in Brussels, Belgium, on June 25, 2021. (Olivier Matthys/Pool via Reuters)
Economy

Ireland to Back Global Tax Deal If Concerns Met: Minister

DUBLIN—Ireland will likely sign up to an overhaul of global corporate tax rules if certainty is brought to bear on its concerns when an updated text of the OECD’s proposals is published shortly, Finance Minister Paschal Donohoe said on Thursday.

Ireland, the low-tax European headquarters for a number of the world’s largest multinationals, has so far declined to sign up to an Organisation for Economic Co-operation and Development agreement struck by over 130 of 139 negotiating countries.

The EU member state has focused its criticism on a proposed minimum rate of “at least” 15 percent, saying the inclusion of the phrase “at least” would undermine the certainty it has given to companies for decades to make long-term investment decisions.

Ireland’s corporate tax rate of just 12.5 perc has helped attract the likes of Google, Facebook and Apple to the country and foreign multinationals now directly employ more than one in 10 Irish workers.

“If certainty and stability can be brought to bear, I believe we’ll make the case for Ireland entering the agreement. If not, we’ll stay where we are,” Donohoe told national broadcaster RTE.

The government would make its view clear on the updated text at or before an Oct. 8 OECD meeting, he added.

Agreement from Ireland, one of the countries that has benefited most from low corporate taxes, would be a big boost for the project to impose a minimum global rate.

Ireland and other holdouts, including fellow EU members Estonia and Hungrary, cannot block the proposed changes.

Irish ministers have also said they are closely watching whether a deeply-divided U.S. Congress will accept President Joe Biden’s proposed tax increases before seeing whether a final agreement is possible.