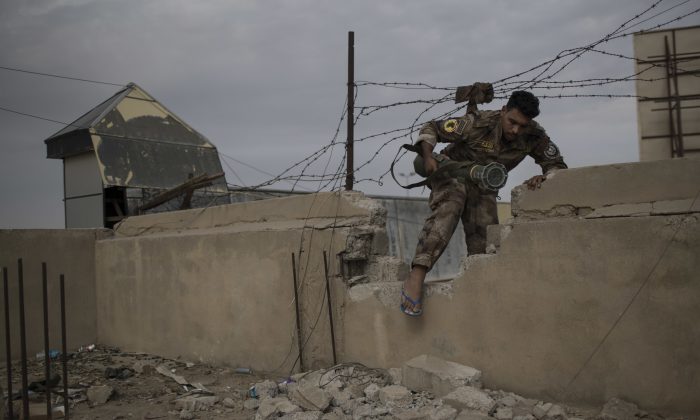 MOSUL, Iraq—Iraqi special forces pushed deeper into the northern city of Mosul on Wednesday, backed by airstrikes but under attack by rockets and suicide bombers from the ISIS terrorist group.

Troops have established a foothold in the city’s east, and drove northward into the Tahrir neighborhood, where families left their houses to flee the fighting. Mortars from ISIS-held territory wounded at least five children trying to flee the fighting, who were evacuated by the troops.

Artillery and airstrikes from the U.S.-led coalition supported the advance, sending plumes of smoke into the air over the city.

Iraqi troops are converging from several fronts on Mosul, the country’s second largest city and the last major ISIS holdout in Iraq. The special forces have been the tip of the spear, driving the furthest into the city itself, but they are still fighting over neighborhoods in its eastern edges.

The offensive to drive the ISIS terrorist group out the northern city, the country’s second largest and the last major ISIS terrorist group bastion in Iraq, began on Oct. 17. After swift initial gains into the suburbs, progress has slowed as troops move into more built-up areas of the city, still home to more than 1 million civilians.

Special forces have captured a foothold in the east, and have been advancing slowly over the past week to avoid casualties and civilian deaths as ISIS fighters emerge to attack from the dense, urban landscape, often with armor-plated suicide car bombs.