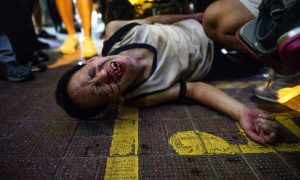 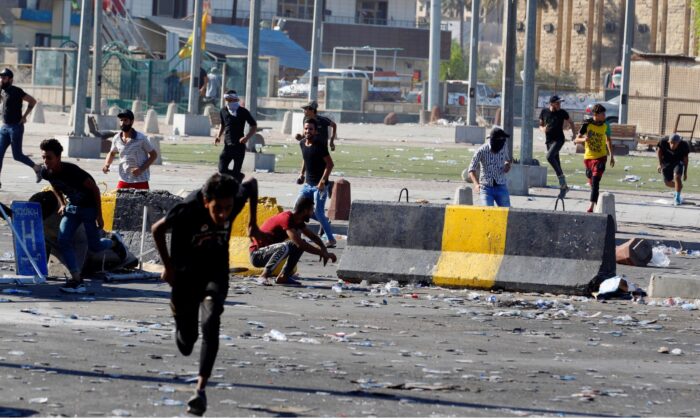 Demonstrators run at a protest during a curfew, three days after the nationwide anti-government protests turned violent, in Baghdad, Iraq on Oct. 4, 2019. (Khalid al-Mousily/Reuters)
Asia & Pacific

Iraqi authorities lifted a days-long curfew in Baghdad on Oct. 5, that anti-government protesters had defied, as the toll from four days of violent unrest rose to 93 killed and hundreds injured.

Traffic ran as normal through the Iraqi capital and streets and main squares were otherwise quiet. Concrete barriers blocked off areas where protesters in their thousands clashed with police during the week.

Authorities did not say why the curfew was lifted.

The country’s parliament speaker proposed on Friday improving public housing for the poor and job opportunities for young people, as well as holding those who had killed protesters to account.

The unrest is the deadliest that Iraq has seen since the declared defeat of the ISIS terrorist group in 2017 and has shaken Abdul Mahdi’s year-old government. The government has responded with vague reform promises that are unlikely to placate Iraqis.

The semi-official High Commission for Human Rights said security forces had detained hundreds of people for demonstrating but then let most of them go. It said more than 3,000 people had been wounded in days of violence.

The security forces have accused gunmen of hiding among demonstrators to shoot at police. Several policemen died.

The protests over unfair distribution of jobs, lack of services and government corruption erupted on Tuesday in Baghdad and quickly spread to other Iraqi cities, mainly in the south.

A curfew in Dhi Qar province, where protesters were also killed this week, was ordered by local authorities starting from 1 p.m.

Powerful Iraqi cleric Moqtada al-Sadr, who has a mass popular following and controls a large chunk of parliament, demanded on Friday that the government resign and snap elections be held. At least one other major parliamentary grouping allied itself with Sadr against the government.

Parliament was set to meet on Saturday to discuss protesters’ demands. Sadr’s bloc has said it will boycott the session.

The United States-led coalition against ISIS, which has its headquarters in the Green Zone, called on “all sides to reduce tensions.”

“The loss of life and injuries—among civilians and Iraqi Security Forces—is deeply concerning. We believe peaceful, public rallies are a fundamental element of all democracies; there is no place for violence,” coalition spokesman Col. Myles B. Caggins III tweeted Thursday morning.

Protest Statement: The @CJTFOIR calls on all sides to reduce tensions. The loss of life and injuries—among civilians and Iraqi Security Forces—is deeply concerning. We believe peaceful, public rallies are a fundamental element of all democracies; there is no place for violence.

The Bahrain Foreign Affairs Ministry called on all its citizens in Iraq to leave the country “immediately” for their own security and safety, and discouraged travel by Bahrainis to Iraq, according to the state-run Bahrain News Agency (BNA).

Amnesty International urged Iraqi authorities to carry out an urgent and independent investigation into the “excessive violence” used against demonstrators.

Protests over deteriorating economic conditions have rocked several other countries in the Middle East and North Africa in recent weeks. In Lebanon, protesters blocked roads and clashed with security forces last week over unemployment, decaying infrastructure, and government corruption. In Egypt, demonstrations over similar economic grievances led to an intensified crackdown on dissent. And in Jordan, an ongoing teachers’ strikes has been considered the longest strike in the country’s history.

By John Davison and Aref Mohammed