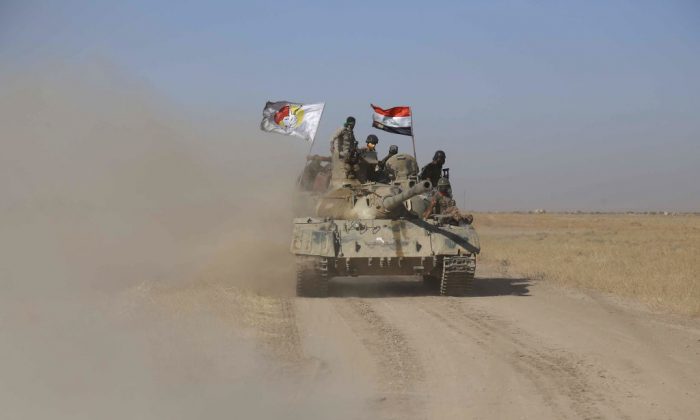 Iraqi government forces supported by fighters from the Abbas Brigade, which fights under the umbrella of the Shiite popular mobilisation units, advance towards the city of Tal Afar, the main remaining stronghold of the Islamic State group, after the government announced the beginning of an operation to retake it from the jihadists on August 20, 2017. (MOHAMMED SAWAF/AFP/Getty Images)
Middle East

BAGHDAD/ERBIL, Iraq – Iraqi security forces launched an offensive to take back the city of Tal Afar on Sunday, their next objective in the U.S.-backed campaign to defeat Islamic State militants, Prime Minister Haider al-Abadi said.

“You either surrender, or die,” Abadi said in a televised speech announcing the offensive, addressing the jihadists.

A longtime stronghold of hardline Sunni Muslim insurgents, Tal Afar, 50 miles (80 km) west of Mosul in Iraq‘s far north, experienced cycles of sectarian violence between Sunnis and Shi’ite Muslims after the U.S.-led invasion of Iraq in 2003, and it has produced some of Islamic State’s most senior commanders.

The city was cut off from the rest of Islamic State-held territory in June. It is surrounded by Iraqi government troops and Shi’ite volunteers in the south, and Kurdish Peshmerga fighters in the north.

Hours before Abadi’s announcement, the Iraqi air force dropped leaflets over the city advising the population to take precautions. “Prepare yourself, the battle is imminent and the victory is coming, God willing,” the leaflets read.

About 2,000 battle-hardened militants remain in Tal Afar, according to U.S. and Iraqi military commanders.

They are expected to put up a tough fight, even though intelligence from inside the city indicates they have been exhausted by months of combat, aerial bombardments, and by the lack of fresh supplies.

“Intelligence gathered shows clearly that the remaining fighters are mainly foreign and Arab nationals with their families and that means they will fight until the last breath,” Colonel Kareem al-Lami, from the Iraqi army’s 9th Division, told Reuters.

Islamic State’s “caliphate”, proclaimed in swathes of northern and western Iraq taken in a shock 2014 offensive, in effect collapsed last month when U.S.-backed Iraqi forces recaptured the militants’ capital in Iraq, the major city of Mosul, after a nine-month campaign.

But parts of Iraq and Syria remain under Islamic State control, including Tal Afar, a city with a pre-war population of about 200,000.

The main forces taking part in the offensive are the Iraqi army, air force, Federal Police and the elite U.S.-trained Counter-Terrorism Service (CTS), who began encircling the city on Sunday.

The Shi’ite Popular Mobilization Forces (PMF), some of whom are trained and armed by Iran, confirmed they are also taking part in the battle. Their involvement is likely to worry Turkey, which claims an affinity with the area’s predominantly ethnic Turkmen population.

Five villages surrounding Tal Afar were retaken by Iraqi Forces and the PMF on the first day of the offensive.

The U.S.-led coalition said in recent days that it had carried out dozens of air strikes on Tal Afar, targeting weapons depots and command centers.

As the campaign got under way, the U.S.-led coalition carried out dozens of strikes in support ofIraqi forces as they advanced on the outskirts of Tal Afar, U.S. officials said.

Only a small portion of the strikes had been planned in advance, while the rest targeted Islamic State fighters emerging during the offensive, they said.

“We clearly need to be in position to ensure that we are providing the eyes on the other side of the hill for the Iraqis,” Lieutenant General Jeffrey Harrigian, the top U.S. Air Force commander in the Middle East, told Reuters.

The capture of Tal Afar would represent another major victory for Iraq.

“The (Iraqi) operation to liberate Tal Afar is another important fight that must be won to ensure the country and its citizens are finally free of ISIS (Islamic State),” said Army Lieutenant General Stephen Townsend, the top U.S. commander in Iraq.

Air Force Chief of Staff General David Goldfein, who was visiting Iraq on Sunday, told a small group of U.S. airmen at al Asad Air Base that Iraq‘s steady progress in the war against Islamic State was a reason to be hopeful.

“Most of us have been fighting over here for most of our adult lives,” Goldfein said. “But here’s what’s interesting: What you’re doing in Iraq is probably the brightest spot in the region, because this is the one place (where you) have a country that’s taking back its country. And they’re leading the war.”

Islamic State, in a statement published on the group’s Amaq news agency on Sunday, claimed to have successfully targeted several vehicles belonging to Shi’ite militia groups to the east and west of Tal Afar,

Lami said Tal Afar’s wide streets would allow tanks and armored vehicles easy passage. Only one part of Tal Afar, Sarai, is comparable to Mosul’s Old City, where Iraqi troops were forced to advance on foot through narrow streets in a battle that resulted in the near total destruction of the historic district.

Waves of civilians have fled the city and surrounding villages under cover of darkness over the past weeks, although several thousand are estimated to remain, threatened with death by the militants who have held a tight grip there since 2014.

“Thousands of people are fleeing Tal Afar for safety,” said Lise Grande, the U.N. Humanitarian Coordinator for Iraq, adding that families are “arriving exhausted and dehydrated”.

“(Fighters) have been using tunnels to move from place to place to avoid air strikes,” said 60-year-old Haj Mahmoud, a retired teacher. “Their faces looked desperate and broken.”

The United Nations International Organization for Migration estimates that between 10,000 to 40,000 people are left in Tal Afar and surrounding villages.

(Reporting by Raya Jalabi in Erbil, Phil Stewart and Ahmed Rasheed in Baghdad, additional reporting by Maher Chmaytelli in Erbil)