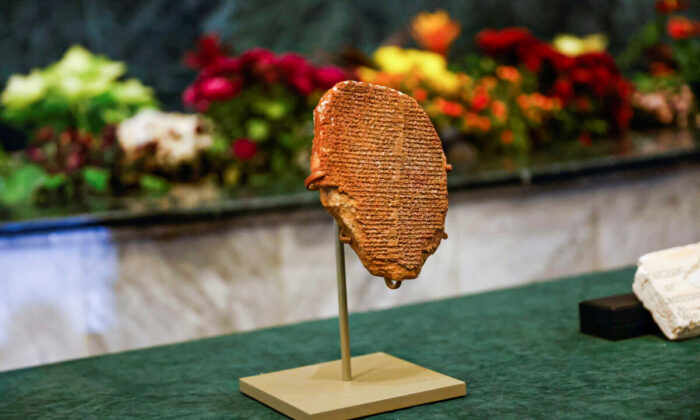 The Gilgamesh Dream Tablet returned to Iraq is displayed at the Ministry of Foreign Affairs in Baghdad, Iraq, on Dec. 7, 2021. (Saba Kareem/Reuters)
Middle East

Iraq Puts on Display Ancient Artifacts Returned by US

BAGHDAD—Ancient artifacts looted and smuggled out of Iraq after the U.S. invasion in 2003 were put on display in Baghdad on Tuesday.

Among the artifacts returned by the United States was a 3,500-year-old clay tablet bearing part of the Epic of Gilgamesh, the ancient Sumerian tale believed to be one of the world’s first pieces of literature.

The tablet, displayed at the Iraqi foreign ministry headquarters, was handed to the Iraqi embassy in Washington by the city’s Museum of the Bible.

U.S. authorities seized the Gilgamesh tablet in 2019 after it was smuggled, auctioned, and sold to an art dealer in Oklahoma and displayed at a museum in Washington, D.C. A court ordered its forfeiture in July.

Iraq’s ancient heritage has been decimated by conflict, destruction, and looting, especially since 2003.

Authorities have been trying to track down, retrieve, and preserve thousands of archaeological relics which are still missing.