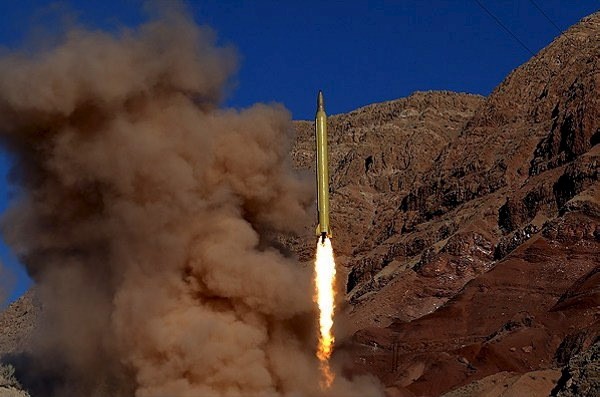 A ballistic missile is launched and tested in an undisclosed location, Iran, in this handout photo released by Farsnews on March 9, 2016. (Reuters/farsnews.com/Handout via Reuters)

Iranian state media published video footage on Friday that claimed to show the launch of a new ballistic missile that has a range of 1,200 miles. But the missile launch was fake, according to a report by Fox News.

The footage was over seven months old and was actually a re-run of a video that showed a failed launch in January, according to two unnamed U.S. officials quoted in the report.

CNN also spoke to an unnamed official. “As far as we can see, it did not happen,” the official said to CNN.

The official said that the electronic signals of a missile launch would have been picked up by US assets in the region, according to CNN.

“You are seeing images of the successful test of the Khorramshahr ballistic missile with a range of 2,000 km, the latest missile of our country,” the Iranian-backed television station said.

The projectile can reach anywhere in the Middle East, Eastern Europe, and some of Asia, including most of India, according to the media.

Iran’s new medium-range missile is suspected to be based from a North Korean design, which has a maximum range of nearly 2,500 miles.

“I am not sure why the Iranians are lying about the range,” said one U.S. official.

The television station claimed that it test-launched the missile just a few hours after displaying the projectile in a military parade in Iran’s capital, Tehran.

The supposed missile launch video came not long after President Trump criticized the Iranian regime at the U.N. General Assembly.

“The Iranian government masks a corrupt dictatorship behind the false guise of a democracy. It has turned a wealthy country with a rich history and culture into an economically depleted rogue state whose chief exports are violence, bloodshed, and chaos,” Trump said.

“We cannot let a murderous regime continue these destabilizing activities while building dangerous missiles, and we cannot abide by an agreement if it provides cover for the eventual construction of a nuclear program,” he continued. “The Iran Deal was one of the worst and most one-sided transactions the United States has ever entered into. Frankly, that deal is an embarrassment to the United States, and I don’t think you’ve heard the last of it — believe me.”

The Israel military shot down a drone on Tuesday Sept. 19 that was approaching Israeli airspace. The drone was Iranian-made and operated by the Hezbollah terrorist group, according to Israeli Defense Forces Intelligence.