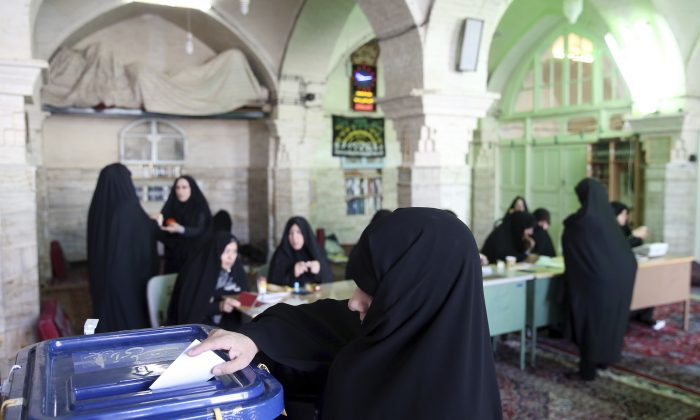 The vote is seen as a referendum on the policies of moderate President Hassan Rouhani, credited with bringing about the deal that curbed Iran’s nuclear activities in exchange for the lifting of crippling international sanctions.

At the same time as parliamentary elections, Iranians are also voting for the Assembly of Experts, a clerical body empowered to choose or dismiss the country’s supreme leader.

Some 53,000 polling stations throughout Iran are taking ballots for the 290-member parliament and the 88-member Experts Assembly. Nearly 55 million Iranians are eligible to vote. State TV showed long lines of people waiting to cast their ballots in the twin elections as the polls opened.

In the parliament vote, reformists seeking greater democratic changes and moderates supporting Rouhani are pitted against hard-liners who oppose the nuclear deal and openings with the West.

The balloting is unlikely to change Iran’s course over major policies regardless of who wins but a win by reformists and moderates will give Rouhani the support he needs as he tries to repair the economy and move toward warmer ties with the United States.

The barring of a majority of reformists from the race by the Guardian Council, a constitutional watchdog that vets election candidates, means they are unlikely to win a majority alone but a substantial bloc would mean a new shift in Iran’s politics.

Among those who cast their ballot in the first hours of the voting was Ayatollah Ali Khamenei, the country’s supreme leader who has the final say on all state matters. He had urged Iranians to vote, saying it was both a “right” and a “responsibility” and that a high turnout would boost Iran’s image and might.

“Whoever likes Iran and its dignity, greatness and glory should participate in this election,” he said after casting his ballot in Tehran. “We have enemies who are eyeing us greedily. Turnout in the elections should be such that our enemy will be disappointed and will lose its hope. People should be observant and vote with open eyes.”

In the capital, Tehran, many voters had their favorite list saved on their cell phones and used them to write the names on the ballots. Others carried pocket-size campaign papers with the 30-seat list for Tehran. Many had blue papers, the color of the reformist-moderate faction, while others had with them yellow papers with the hard-liner lists.

A high turnout is likely to help reformists and moderates to return in significant numbers in order to reduce hard-liners’ ability to block Rouhani’s agenda of economic, social and political reforms.