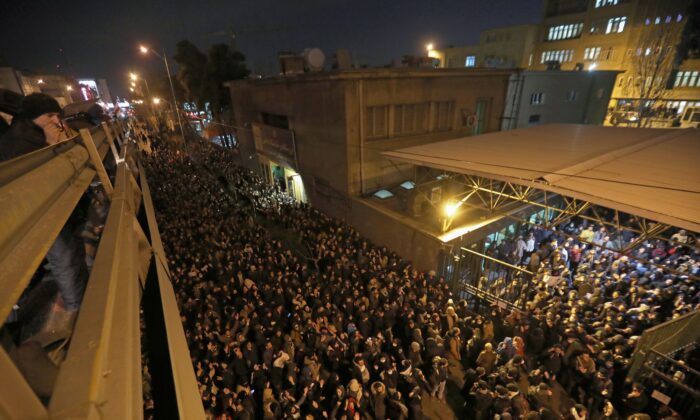 Iranians students demonstrate following a tribute for the victims of Ukraine International Airlines Boeing 737 in front of the Amirkabir University in the capital Tehran, on Jan. 11, 2020. (ATTA KENARE/AFP via Getty Images)
International

President Donald Trump warned Iranian leaders on Jan. 12 to hold back from killing its citizens who are protesting across the country after Tehran admitted to mistakenly shooting down a Ukrainian airliner, killing all 176 people aboard, including 82 Iranians.

In a string of Twitter posts over the weekend, including some in Farsi, that expressed support for the Iranian people, Trump said the United States is watching the Islamic regime closely. Protesters continued to gather on Jan. 12 for the second day of widespread demonstrations, as public anger boiled over following days of denials by the Iranian military that it was to blame.

“To the leaders of Iran-DO NOT KILL YOUR PROTESTERS. Thousands have already been killed or imprisoned by you, and the World is watching,” Trump said. “More importantly, the USA is watching. Turn your internet back on and let reporters roam free! Stop the killing of your great Iranian people!”

Riot police fired tear gas at crowds of protesters, who turned out in the thousands at the capital on Jan. 11, many chanting “Death to the dictator,” referring to the Islamic regime’s Supreme Leader Ayatollah Ali Khamenei.

Videos posted online showed protesters shouting slogans against the regime and moving through subway stations and sidewalks, many near Azadi (Freedom) Square after an earlier call for people to demonstrate there. Other videos suggested that similar protests were taking place in other Iranian cities.

The Iranian regime, Trump said in additional Twitter posts in both English and Farsi, should allow human rights groups to monitor and report on the continuing protests. He warned the regime against committing another massacre of peaceful protesters and hinted at the censorship being imposed on the people, such as the internet being restricted.

One of Trump’s posts in Farsi was “the most liked Persian tweet in the history of Twitter,” according to Saeed Ghasseminejad, a senior Iran and financial economics adviser at The Foundation for Defense of Democracies.

Riot police in black uniforms and helmets amassed in Vali-e Asr Square, at Tehran University, and other landmarks amid the protests. Revolutionary Guard members patrolled the city on motorbikes, and plainclothes security were also out in force. People looked down as they walked briskly past police, hoping not to draw attention to themselves.

Early last month, the United States accused Iranian security forces of killing potentially more than 1,000 people as part of their suppression of protests. The regime at the time acknowledged that at least 200,000 took part in the protests and 7,000 were arrested, marking possibly the largest demonstrations against the regime in its 40-year history.

Those protests broke out in Iran on Nov. 15, 2019, after authorities announced a new fuel-rationing scheme that would see gasoline prices increase as much as 50 percent.

In additional Twitter posts over the weekend, Trump reiterated that he’s stood by the people of Iran since the beginning of his presidency. The Iranian leadership is struggling to keep the crippled economy afloat under tight U.S. sanctions.

“My Administration will continue to stand with you. We are following your protests closely, and are inspired by your courage,” Trump said, in part, in a Jan. 11 Twitter post.

In one instance of the protests, students in Tehran University were seen making their best efforts to avoid walking on flags of the United States and Israel that were painted on the ground, defying orders from the Iranian regime to do so, according to a video posted by U.N. Watch. When agents prodded the students to trample the flags, they cried out in protest that the regime was “shameless” and “dishonorable.”

U.S. Defense Secretary Mark Esper said on Jan. 12 that the administration believes there will be no further Iranian attacks in retaliation against the United States for the killing of its top general.

“We do not expect any further attacks,” Esper said on CBS’s Face the Nation. “You can see the Iranian people are standing up and asserting their rights, their aspirations for a better government, a different regime.”

Gen. Qassem Soleimani, the head of Iran’s Quds Force, was killed early on Jan. 3 in a U.S. airstrike ordered by Trump, who has said the general was plotting an imminent attack on American citizens. It follows repeated attacks in recent months by Iranian-backed Shiite terror groups against bases hosting U.S. troops in Iraq.

Last week, Trump revealed in an interview on Fox News that the United States launched the airstrikes because it believed Soleimani was targeting four embassies, with Baghdad being the primary target. Trump described it as an “imminent” attack.

Esper said that the intelligence involving the embassy attack was “shared with the Gang of Eight” and not with the broader Congress.

The United States is still open to negotiating with Iran, Esper said, adding that the U.S. government is willing to sit down and discuss with the Iranian government “without precondition” on a “new way forward.”

As Iran vowed to avenge Soleimani’s killing, Tehran responded with missile strikes on U.S. targets in Iraq. No U.S. soldiers were killed in the attack.

Trump on Jan. 8 warned the Islamic regime that the United States would respond swiftly to any retaliation. With no Americans harmed, however, Trump opted for sanctions and said he was ready for peace.