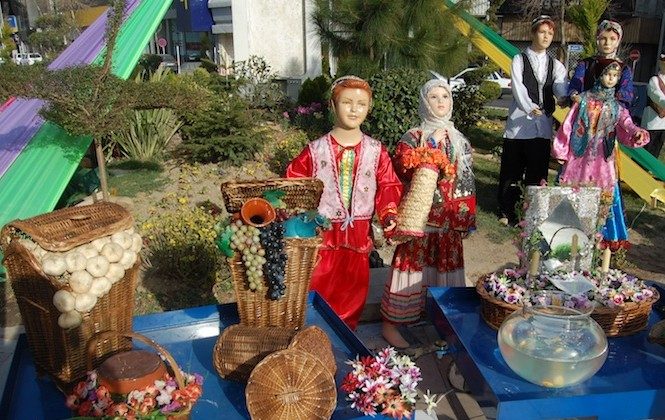 A Haft-seen table containing seven items that start with an ‘S,’ part of the start of the Iranian New Year celebration, is seen at the Madar square on March 26 in Tehran, Iran. (The Epoch Times)
Middle East

While Iran’s nuclear ambitions were in the spotlight again earlier this week at the 2012 Nuclear Security Summit in Seoul, the Iranian people celebrated New Years.

Sunday marked the final day of “Noruz,” or ‘the new day,’ the 13-day-long New Year celebration on the nearly 3000-year-old Iranian calendar. The celebrations always begin on the vernal equinox, which is the first day of spring, usually falling on March 21.

“We are living the same way as all other years. We celebrate the New Year like always, and try not to be worried about anything,” says 31-year-old Iranian “Lila” (not her real name) living in Tehran.

“Iranian people are peaceful. Kindness and hospitality has been integrated in our culture for thousands of years. We are against violence and war,” said Lila.

Although Noruz originated from Iran, it is also celebrated in other countries like Afghanistan and Tajikistan and in some parts of Kazakhstan, Azerbaijan, Turkmenistan, Pakistan, Kyrgyzstan, and Turkey. In the past, these countries were either part of, or influenced by, the Persian Empire.

Among the many rituals of Noruz are cleaning the house before the New Year, setting the “haft-seen” table with seven specific items, and visiting family, friends and relatives.

“Haft-seen,” which means the seven ‘S’, is a table consisting of seven items that all begin with the sound ‘S’ in Persian. There are traditional and contemporary versions of the seven items, including things such as apples, green grass, garlic, Samanu, oleaster fruit, coins, and somaq (kind of berry used as a spice). Most of these items are either a sign of thanks giving for the abundance of the past year or a wish for its abundance in the future.

The Haft-seen table is usually green and is an Iranian national symbol and a reflection the renewed life of spring.

Lila said the tables sprout up throughout the city during Noruz.

“You can see haft-seen everywhere. At homes, shops and even at offices. This year, Haft-seen were set in some main squares in Tehran,” she said.

On the first day of Noruz, family members gather around the Haft-seen table, and await the exact moment of the arrival of the spring. At that moment, they hug and kiss and wish each other a happy New Year. Then gifts are exchanged and usually elder family members give the younger ones gifts and money. It is believed that the money from an elder brings fortune and abundance and whatever a person does at the moment of New Year will affect the rest of the year. For that reason, people try to be dressed nicely and be kind to each other.

From that moment on, during the thirteen days of the Noruz celebration, the young visit their elders first, and the elders return the visit later.

On the eve of the last Wednesday of the out-going year, Iranian families gather for the Wednesday Feast and a special bonfire over which they leap while singing “Your redness is mine; my sallow yellow complexion is yours.” The song’s lyrics are a request for the fire to take their yellow sickness and in turn give them ruddy health.

The Noruz ceremony ends with “Sizdah Bedar” on the thirteen day of the first month of the new year. Almost all people spend the last day outdoors. They go to the countryside and parks from early in the morning until in the evening for a festive picnic while enjoying the good weather that spring brings.

Sizdah bedar is also called “nature day” and it is believed that on this day people should throw out all the worries, sins and concerns of the last year. Girls at the age of marriage and unmarried women often tie blades of green grass and sing: “The next year I’ll be in my husband’s house and have my baby in my arms.”

Lila explained that Sizdah bedar is about more than just enjoying the fresh air, however.

“People never stay at home because it is believed that it brings bad fortune for them. On this day, people can be seen everywhere. Parks are full of happy people and sometimes it will get hard to find a free place in Tehran,” she said.

Noruz is Iran’s largest celebration and originated from Zoroastrianism, an old religion dating back to approximately 3,500 years ago. Although nowadays most Iranian people are Muslim, Noruz is a central part of Iranian culture and in Islamic Iran people still consider Noruz the beginning of the New Year and celebrate it enthusiastically.