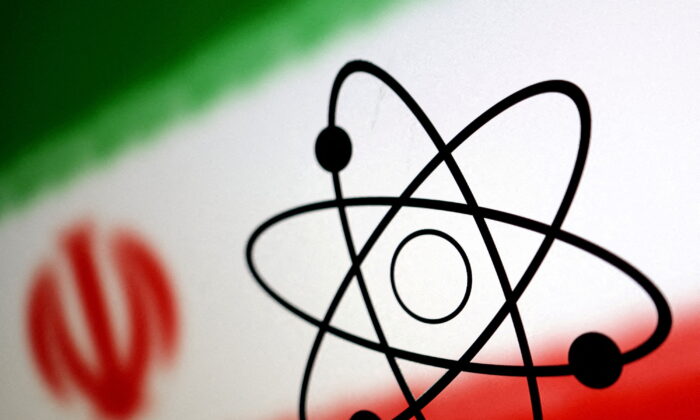 The atomic symbol and the Iranian flag are seen in this illustration, July 21, 2022. (Dado Ruvic/Illustration/Reuters)
Middle East

VIENNA—The Iranian regime is pressing ahead with its rollout of an upgrade to its advanced uranium enrichment programme, a report by the U.N. nuclear watchdog seen by Reuters on Monday showed, even as the West awaits Tehran’s response on salvaging its 2015 nuclear deal.

The first of three cascades, or clusters, of advanced IR-6 centrifuges recently installed at the underground Fuel Enrichment Plant (FEP) at Natanz is now enriching, the report said, the latest underground site at which the advanced machines have come onstream.

Diplomats say the IR-6 is its most advanced model, far more efficient than the first-generation IR-1—the only one the deal lets it enrich with.

For more than a year, Tehran has been using IR-6 centrifuges to enrich uranium to up to 60 percent purity, close to weapons-grade, at an above-ground plant at Natanz.

Recently, it has expanded its enrichment with IR-6 machines at other sites. Last month a second IR-6 cascade at Fordow, a site buried inside a mountain, started enriching to up to 20 percent.

In the confidential report to U.N. member states, the watchdog, the International Atomic Energy Agency, wrote: “On 28 August 2022, the Agency verified at FEP that Iran was feeding UF6 enriched up to 2% U-235 into the IR-6 cascade … for the production of UF6 enriched up to 5% U-235.”

Of the two other IR-6 cascades installed at the Natanz FEP, one was undergoing passivation with depleted UF6, a process that is carried out before enrichment proper begins, and the other had yet to be fed with any nuclear material, the agency said.

The Iranian regime and the United States appear to be inching towards an agreement to revive the 2015 deal, which placed restrictions on Iran’s nuclear activities in exchange for lifting sanctions against Tehran. That deal unravelled after a U.S. withdrawal in 2018, after which the Iranian regime decided to go ahead and breach those restrictions one by one.

After more than a year of indirect talks, Iran has said it will soon respond to the latest U.S. comments on a compromise text submitted by the European Union, which is coordinating the talks.

A deal would involve undoing much of the enrichment work Iran has been doing, and capping its enrichment at 3.67 percent purity.

Its installation of advanced machines at underground sites like Natanz and Fordow, however, could be a signal to any power that might want to attack it if there is no agreement, since it is unclear that airstrikes on those sites would be effective.

Western powers worry that Iran is moving towards the ability to make nuclear bombs. Iran denies any such intention.