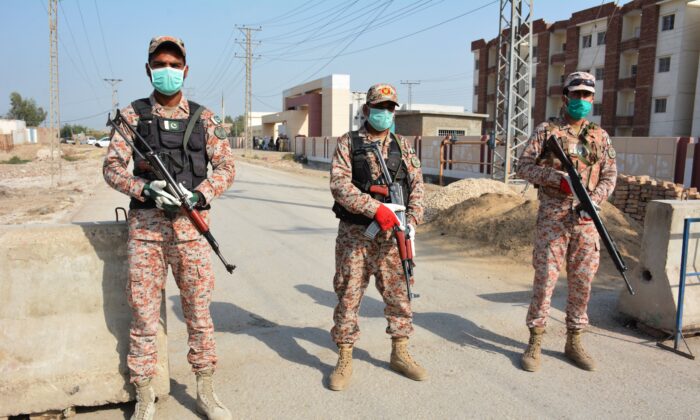 Soldiers in facemasks guard a road leading to a COVID-19 quarantine facility in Sukkur, Iran, on March 17, 2020. (Shahid Ali/AFP/Getty Images)
By Ella Kietlinska

The Iranian regime has launched a propaganda and influence campaign calling globally for an end to U.S. sanctions amid the COVID-19 health crisis in order to obtain cash, while rejecting humanitarian aid offered by the U.S. and international organizations, the State Department has warned.

The regime’s goal is to “raise funds for its terror operations,” not to bring health relief to Iranian people, the State Department said in a statement on April 6.

In March, Iranian Minister of Foreign Affairs Javad Zarif accused the United States of “draining Iran’s economic resources needed to fight COVID-19” through its economic sanctions. He called on world to ignore them.

The Trump administration imposed sanctions on Iran in 2018 aimed at cutting off the “revenues the [Iranian] regime uses to bankroll terrorist groups, foment global instability, fund nuclear and ballistic missile programs, and enrich its leaders,” the White House said at the time.

According to the State Department the Iranian regime has spent over $16 billion since 2012 to fund its terror proxies abroad while cutting the country’s healthcare budget. Iranian health minister Hassan Ghazizadeh Hashemi had resigned in January 2019 over repeat budget cuts.

The State Department also highlighted that, “in July 2019, 1 billion euros ($ 1.1 billion) intended for medical supplies ‘disappeared’ and another $170 million dollars allocated for medical goods were instead spent by the regime on tobacco.”

In late March, Iran’s President Hassan Rouhani inadvertently revealed when praising the Ministry of Foreign Affairs for their “concerted effort to influence public opinion and say ‘no’ to sanctions,” that these efforts “are aimed at bringing back our money seized in other countries,” the State Department said.

The Iranian regime had withdrawn $4 billion dollars from its sovereign wealth fund in the last two years for defense and military spending.

“Clearly, their priority is access to cash, not medicine,” the department said.

On April 6, Iran’s Supreme Leader Ayatollah Ali Khamenei finally approved the withdrawal of $1 billion from the fund to fight the Chinese Communist Party (CCP) virus after it was requested by five members of the Iranian parliament and Rouhani in March, according to the State Department.

Before April 6, Khamenei had prioritized an increase funding for the Islamic Revolutionary Guard Corps (IRGC) by 33 percent over its existing year budget, as well as double funding for the Basij, which is the regime’s “brute squad” that killed around 1,500 Iranians in the November 2019 protests.

The United States offered humanitarian aid to Iran in February to help the Iranian people in their fight against the CCP virus.

U.S. Secretary of State Mike Pompeo reminded the regime on Feb. 28 that “certain donations to Iran intended to relieve human suffering, including the donation of medicine, are exempt from U.S. sanctions. In addition, the United States maintains broad exceptions and authorizations to its sanctions for the commercial export of food, medicine, medical devices, and agricultural products to Iran.”

According to the State Department, the Iranian regime refused America’s offer of “humanitarian assistance and medical supplies to the Iranian people” intended to counter the COVID-19 outbreak.

The United States established in October 2019 a transparent channel with the Swiss government through which humanitarian aid could flow to Iran. Payments to exporters are guaranteed by a Swiss bank. However, they have to meet “a very high standard of due diligence,” U.S. Special Representative Brian Hook told Reuters during a press briefing in January after the first sales of cancer and transplant drugs to Iran.

“The Swiss Humanitarian Trade Arrangement will help ensure that humanitarian goods continue to reach the Iranian people without diversion by the regime,” Secretary Steven T. Mnuchin said in Feb. 27.

The State Department said that according to Iranian documents, healthcare companies from Iran have been importing COVID-19 test kits since January.

However Khamenei has rejected Washington’s offer. Iranian Foreign Ministry spokesman Abbas Mousavi said in a news conference on April 6, “Iran has never asked and will not ask America to help Teheran in its fight against the outbreak … But America should lift all its illegal unilateral sanctions on Iran,” according to Reuters.

The Iranian Health Ministry also revoked its approval to a Doctors Without Borders’ mission two days after its arrival in Iran on March 22. The nine person team from this international medical organization was going to build a temporary 50-bed hospital in Iran and treat Iranian patients.

Widespread protests calling for government change erupted in Iran at the end of 2017 as protesters expressed their anger over deteriorating living conditions of the Iranian people. The protests have continued since then, with momentum building in November 2019 after a 50 percent hike in gasoline prices, and again in January after a Ukrainian passenger plane was shot down by the Iranian military.

The State Department referenced graffiti in the suburbs of Tehran reading “The Islamic Republic in Iran is the real coronavirus,” and declared that the United States “will continue to support the needs and aspirations of the Iranian people, who are the longest suffering victims of the Iranian regime.”