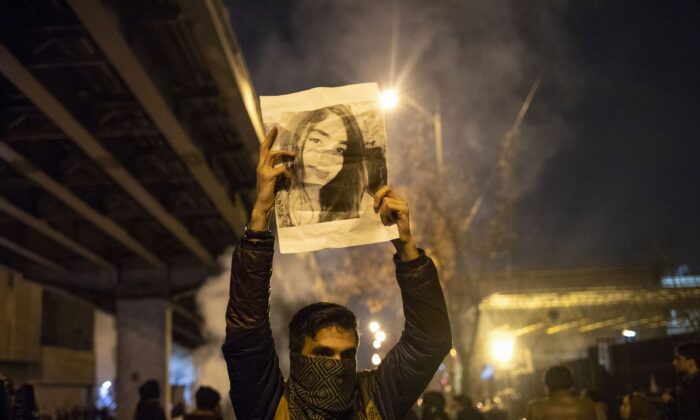 An Iranian man holds a picture of a victim of the Ukrainian 752 flight crash during a demonstration in front of Tehran's Amir Kabir University on Jan. 11, 2020. (STR/AFP via Getty Images)
Middle East

Protests in various parts of Iran after the regime admitted to shooting down Ukraine flight 752 by accident, killing all 176 people aboard, have been met with violent confrontation by authorities.

According to U.S.-based Iranian journalist Masih Alinejad, who is in touch with the victims’ relatives in Iran, Iranian authorities are also pressuring family members to avoid speaking to the media about the tragedy.

By contrast, in Canada, where most of the passengers on the flight taking off from Tehran were headed—57 held Canadian citizenship and many others were residents of the country—elected officials are pushing for accountability from Iran. Several large-scale memorials have since been held, with mayors and provincial and federal representatives attending.

Prime Minister Justin Trudeau met with family members of the victims and attended memorial services in different parts of Canada to honour the victims. Edmonton Mayor Don Iveson, whose city was home to 13 of the victims, read a poem by the Persian poet Rumi and delivered condolences in Persian at a memorial ceremony held at the University of Alberta, where many of the victims worked or studied. A video of a tearful U of A president David Turpin speaking the day after the tragedy was circulated widely in Iranian social media chat groups.

“On behalf of Iranian-Canadians, thank you Canada, thank you for being a gracious parent for us troubled children,” read a social media post shared by many among the Iranian diaspora in Canada over the weekend.

London-based Iranian late-night show host Sina Valiollah wrote: “I’m thankful that there were some dual citizens on the flight so at least their second country would seek the truth. If all the passengers were Iranians, by now [Iranian state TV] would have made an idiotic report with fake witnesses to utter nonsense and the issue would have been wrapped up!”

The downing of the passenger plane on Jan. 8—just a few days after the United States killed Iranian Maj. Gen. Qasem Soleimani in Iraq and amid a big push by Iran’s state media to rile up nationalistic sentiment over his death—was a major blunder for the Iranian regime (some remain skeptical that the attack was accidental.) The tragedy followed another embarrassing incident just days before, when more than 50 people were killed in a stampede at the state funeral in Soleimani’s hometown of Kerman.

Demonstrations erupted in various cities following the authorities’ admission that the military shot down the plane, with protesters chanting slogans against the regime and its leadership.

Citing accounts of protests in various parts of the country, veteran Paris-based Iranian journalist Amir Taheri said that “this is [the] first time regime change is demanded at grassroot [sic] level, especially by young Iranians.”

Kaveh Shahrooz, a senior fellow with the Ottawa-based Macdonald-Laurier Institute, wrote on Twitter: “Maybe I’m seeing only what I want to see, but this time somehow feels different. Ordinary people are angrier. The regime seems more scared. Their defenders in the West are running for cover. Something seems to have shifted.”

In a video shot on Jan. 14, University of Tehran students are seen chanting “Neither referendum, nor reform.” Instead, they ask for “Strike, revolution.”

“Reform” refers to the prevailing line of thought in prior years that saw many of those not content with living under the regime rallying behind the moderate faction in the establishment, with the justification that a regime change is out of reach and the most practical course of action is to work toward making reforms and pushing for gradual freedoms within the regime. In recent years, however, given that both the moderate and hardliner factions are ultimately loyal to the regime, there have been increasing calls for an outright regime change.

In a tweet, U.S. President Donald Trump offered his own comments on not putting too much stock on negotiations with the Iranian regime.

“National Security Adviser suggested today that sanctions & protests have Iran ‘choked off’, will force them to negotiate. Actually, I couldn’t care less if they negotiate. Will be totally up to them but, no nuclear weapons and ‘don’t kill your protesters,’” he wrote.

Expanding on the tweet, Richard Goldberg, a former adviser to Trump on Iran, said in a tweet in Persian that Iranian opposition has always complained that negotiating with the regime while people are protesting in the streets gives legitimacy to the regime and weakens the protesters.

“This tweet from the president is an important statement that should give more courage to Iranians as they go on the streets,” he said.

For his part, Trump also sent tweets in Persian offering support to the protesters, while warning the regime not to kill the demonstrators.

During last November’s protests sparked by overnight fuel price hikes, Iranian authorities killed 1,500 people, Reuters reported citing insider sources. Due to an internet blockade during the protests, few details of confrontations with the protesters are available.

Iranian-born Saeed Ghasseminejad, a senior adviser at the Washington-based Foundation for Defense of Democracies, noted the high number of “likes” one of Trump’s Persian tweets has garnered, saying, “It is already the most liked Persian tweet in the history of Twitter. A strong show of support by Iranians for Trump’s Iran policy.” Trump’s tweet, which at the time of this writing has close to 370,000 likes, has considerably more likes than most of his recent tweets. Non-Iranian users have contributed to the like count as well.

Some Iranian diaspora commentators who are not a fan of Trump have also praised his approach on Iran.

In an op-ed for the Toronto Star, Shahrooz lists the reasons he doesn’t support Trump’s policies such as his travel ban, but says he has “grasped certain key truths about dealing with Iran that other presidents missed.”

“While Barack Obama’s team tried to distinguish between ‘moderates’ and ‘hardliners’ in Iran’s regime, Trump has recognized that these distinctions are insignificant,” Shahrooz wrote. “Instead, Trump has so far rightly targeted Iran’s entire regime.”

He adds that Trump has figured out that the regime “responds to sticks not carrots,” revealing them as “paper tigers” after they didn’t retaliate strongly over the killing of Soleimani. He contrasts this with the approach taken by Obama, who “rewarded Iran with a windfall, both in cash and sanctions relief,” but failed to persuade Iran to change its hostile behaviour in the region.

“Finally, for all his shortcomings, Trump supports Iran’s citizens fighting their repressive government,” Shahrooz wrote. “In 2009, millions took to Iran’s streets in protest and chanted ‘Obama, you’re either with [the regime] or with us.’ Obama remained silent, effectively signalling that he was with the regime.”