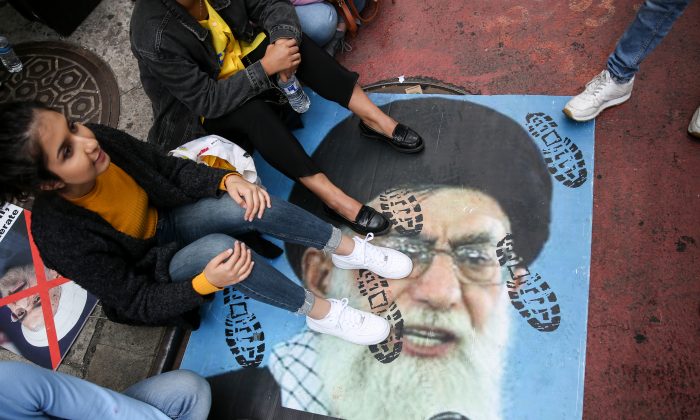 Participants protest the presence of Iranian President Hassan Rouhani at the UN during an Iranian American Community of New York event in New York on Sept. 24, 2018. (Samira Bouaou/The Epoch Times)
By Bowen Xiao

NEW YORK—A crowd largely comprised of Iranian-Americans gathered to protest the Iranian regime and President Hassan Rouhani outside the hotel in New York where Rouhani is staying during this week’s meeting of the U.N. General Assembly.

Rouhani arrived in New York on Sept. 23 to attend the annual General Assembly session, which starts on Sept. 25.

This year marks the 73rd session of the General Assembly, where each country’s representative can address the group. Rouhani is expected to speak on the opening day.

Some rally-goers mentioned U.S. President Donald Trump’s sanctions against Iran and his decision to withdraw from the Iran nuclear deal as an effective means to end the Iranian regime’s hostilities.

“Sanctions against Iran is something that we have been asking for a long, long time. It is the only way that I can think of that would stop the Iranian Regime from doing what it’s doing,” Kazerounian said.

The Iran nuclear deal reached in 2015 under former President Barack Obama provided the country with an estimated $150 billion in sanctions relief, including payments of $1.7 billion from the United States to settle a decades-old arbitration claim.

Trump, who was a critic of the deal since before his presidential campaign, reimposed tight sanctions on Iran.

While the regime has always claimed its nuclear program was for peaceful purposes, Israeli Prime Minister Benjamin Netanyahu on April 30 presented documents that he said prove Iran had been developing nuclear weapons before the signed deal with the United States and other world leaders. Netanyahu said the documents were obtained by an Israeli intelligence operation.

“Obama supported the [Iranian] government, But Trump’s sanctions put pressure on the Iranian government,” said Vahid Nasir, a contractor originally from Iran, who traveled from Los Angeles to take part in the protest.

Nasir lamented loudly when touching upon recent reports that former Secretary of State John Kerry, an Obama appointee, had met with top Iranian officials in an attempt to salvage the now-abandoned nuclear deal.

“I just want to say to Kerry, you got eight years to support the Iranian regime. They killed Iranian people, they tortured them and you didn’t say anything—just stop it. They [Obama administration] supported Hezbollah. Why are you doing that?” Nasir said.

Nasir said Kerry is still trying to “lobby” the regime. He mentioned how Obama allegedly canceled an investigation into Hezbollah, an Islamist terrorist group, to secure the nuclear deal.

Politico reported that the Obama administration derailed a law-enforcement campaign that targeted drug trafficking by Hezbollah, even as the terrorist group was playing a key role to traffic cocaine into the United States.

The United States lists Iran as a state sponsor of terrorism. According to the Department of State’s Country Reports on Terrorism 2017, Iran “continued” its terror-related activity last year, including its support for “Hezbollah, Palestinian terrorist groups in Gaza, and various groups in Syria, Iraq, and throughout the Middle East.”

Before coming to New York, Rouhani said on Sept. 23 that he “will make the U.S. regret” exiting the nuclear agreement.

“It is a threat, basically. It’s a terrorist threat against the U.S. and the West,” Kazerounian said.

“Terrorism started with them [Iran], they have created this monster which could eat them as well.”

Trump will be addressing the General Assembly on the opening day on Sept. 25, the same day as Rouhani. He will also chair a special U.N. Security Council meeting on Sept. 26 about nuclear non-proliferation.

According to Secretary of State Mike Pompeo, Trump will have strong words about the Iranian regime.

“He’ll call on every country to join our pressure campaign in order to thwart Iran’s global torrent of destructive activity,” Pompeo said.

Last year, Trump told the General Assembly that the Iranian regime uses its oil profits to fund Hezbollah and other terrorist groups.

“We cannot let a murderous regime continue these destabilizing activities while building dangerous missiles, and we cannot abide by an agreement if it provides cover for the eventual construction of a nuclear program,” Trump said.

The Iranian regime may now, in fact, collapse because of his administration’s policies, Trump said in a recent interview with Bloomberg.

“When I came into here, it was a question of when would [Iran] take over the Middle East,” Trump told Bloomberg on Aug. 30.

“Now, it’s a question of will they survive. It’s a big difference in one and a half years.”