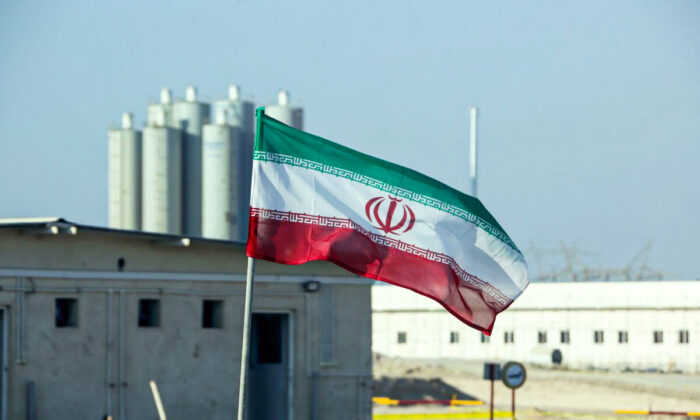 An Iranian flag in Iran's Bushehr nuclear power plant during an official ceremony to kick-start works on a second reactor at the facility, in Bushehr, Iran, on Nov. 10, 2019. (Atta Kenare/AFP via Getty Images)
Middle East

Iran’s nuclear chief is warning that the country has the “technical ability” to produce an atomic bomb but reiterated previous remarks by Iranian officials that the country has no intention of doing so, despite social media accounts linked to Iran’s Islamic Revolutionary Guard Corps (IRGC) that threaten to produce nuclear warheads for missiles.

Mohammad Eslami, head of the country’s atomic energy organization, made the comments on Aug. 1, according to the semi-official Fars news agency.

Eslami echoed comments made last month by Kamal Kharrazi, a senior adviser to Supreme Leader Ali Khamenei, who stated that Iran has the technical means to build a nuclear bomb, but “there has been no decision by Iran to build one.”

Iran has now apparently enriched uranium to 60 percent purity, 20 to 30 percent below the purity required for building weapons, but has long-denied that it is seeking a nuclear weapon.

The 2015 Iran nuclear deal, formally known as the Joint Comprehensive Plan of Action (JCPOA), had capped the level of enrichment purity at 3.67 percent—suitable for generating civilian nuclear energy.

Former President Donald Trump’s administration withdrew the United States from that deal in 2018, having previously branded it a “horrible, one-sided deal that should have never been made,” before reimposing tight sanctions on the country.

When withdrawing from the deal, Trump said that he refused to allow the United States to be “held hostage to nuclear blackmail.”

However, President Joe Biden’s administration hopes to entice Iran back to the agreement in an effort to constrain the country from bolstering its nuclear program; a broad outline of a revived deal was essentially agreed in March.

Talks between the two nations, albeit indirect, have so far proven unsuccessful, because of conflicts over Tehran’s demand that Washington provides guarantees that no U.S. president will abandon the deal in the future, something that Biden can’t promise because the nuclear deal is a non-binding political understanding and not a legally binding treaty.

Iran’s lead negotiator on the deal wrote on Twitter on July 31 that his country seeks a “swift conclusion” to the ongoing negotiations and that Tehran has responded to European Union foreign policy chief Josep Borrell’s new proposal to end the failed talks.

Ali Bagheri, Iran’s deputy foreign minister, wrote: “We shared our proposed ideas, both on substance and form, to pave the way for a swift conclusion of Vienna negotiations” and that “we work closely with our JCPOA partners, in particular the Coordinator, to give another chance to the U.S. to demonstrate good faith & act responsibly.”

“As Iran, we stand ready to conclude the negotiations in a short order, should the other side be ready to do the same,” Bagheri added, but didn’t provide further details as to when the talks would resume.

The IRGC-linked Bisimchi Media (Radioman Media) Telegram channel published a video titled “When Will Iran’s Sleeping Nuclear Warheads Awaken,” in which it said that Tehran would start building nuclear bombs “in the shortest possible time” if “the U.S. or the Zionist regime make any stupid mistakes,” according to a translation by Iran International.

The video also states that Iran’s ballistic missiles could turn “New York into hellish ruins” and that “the nuclear facilities of Fordow [fuel enrichment plant] have been built deep under mountains of Iran and are protected against trench-busting bombs and even nuclear explosion … all infrastructures required for nuclear breakout have been prepared in it,” according to Iran International.

The outlet reported that the video also states that the facilities at Natanz uranium enrichment site “may be highly vulnerable to a possible attack by Western powers and Israel” but that “Fordow will immediately assume war footing and begin the nuclear breakout project within a short time if Natanz comes under missile attack.”