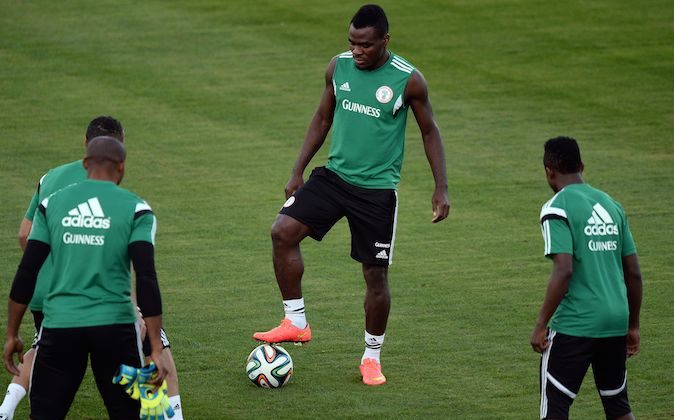 Nigeria's forward Emmanuel Emenike (C) warms up with teammates during a training session in Campinas on June 13, 2014 during the 2014 FIFA World Cup tournament in Brazil. (JEWEL SAMAD/AFP/Getty Images)
Soccer

Live stream is available on Watch ESPN (not for DirectTV subscribers).

PORTO SEGURO, Brazil (AP) — Cristiano Ronaldo and his Portugal teammates can expect to come under massive early pressure in their World Cup opener against Germany on Monday.

Germany always prepares meticulously for its opening match at a tournament and has the results to show for it — winning 12 of its 17 World Cup openers and losing only once, 2-1 to Algeria in 1982. Germany bounced back to reach the final that year.

Coach Joachim Loew has made little secret of his game plan in the Group G match — to play high-tempo football right from the start and to wear down the Portuguese in the midday heat and humidity of Salvador.

Germany is based a short flight away in similar conditions on the Atlantic coast and has been training at the local kickoff time of 1 p.m (1600 GMT).

Loew has a healthy respect for Portugal and its star striker, calling Ronaldo’s team a “world champion in counterattacking.”

“They are ranked just behind us at No. 4 (Germany is No. 2), and they are not just about Ronaldo,” Loew said. “Portugal is an extremely dangerous team.”

Perhaps, but Portugal has not had much luck against Germany. Germany won 3-1 in the match for third place at the 2006 World Cup, beat Portugal 3-2 at the 2008 European Championship and won again 1-0 at the start of its Euro 2012 campaign.

“Still, they keep on reaching semifinals. They are a hard nut to crack,” Loew said.

There have been some doubts about Ronaldo’s fitness following a left-knee injury but FIFA’s player of the year trained normally at the end of the week.

“You can’t shut him down completely, he is a player who scores 50 goals a season,” the Germany coach said. “But we’ve watched a lot of videos, we know his running patterns, how he likes to lurk behind defenders.

“It has to be a team effort against him.”

Germany arrived in Brazil a week ago with plenty of injury worries, but Loew exuded confidence in his only news conference earlier this week.

“The injury situation is getting better by the day and that’s why I am in a good mood,” he said.

Still, injuries are forcing Loew to tinker with his lineup. Captain Philipp Lahm, usually right back, is likely to move into a defensive midfield role. Sami Khedira is expected to be the other defensive midfielder but he lacks match practice after missing six months with a knee injury. Lahm himself missed most of the training camp with an ankle problem, while Bastian Schweinsteiger will probably be on the bench as he has been nursing a knee injury as well.

With the injured Marco Reus ruled out of the World Cup, Lukas Podolski could return to the starting 11 as an attacking midfielder.

Germany’s defense could consist of four players who usually play as central defenders, with Jerome Boateng moving to the right flank to take Lahm’s place. Boateng defended well against Ronaldo two years ago at Euro 2012.

Striker Miroslav Klose, who needs two goals to break the World Cup record of 15 held by Brazil’s Ronaldo, is likely to be on the bench, with Loew favoring a “false nine” system with deep-lying forwards rather than traditional strikers.