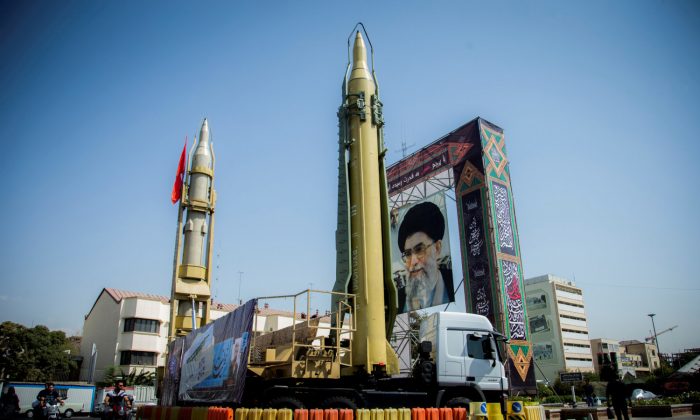 Iran unveiled a new short-range ballistic missile on Feb. 9, adding to its arsenal of missiles—the greatest in the Middle East—which it relies on for military muscle.

The Raad-500 missile was announced by Iran’s Revolutionary Guards media, as officials said that a satellite named Victory had failed to reach orbit.

Iran’s latest home-grown Raad-500 missile has almost double the range—310 miles—of a similar missile, the Fatah-110, according to the military.

The cousin of the Fatah-110, the Fatah-330, also with a 310-mile range, is one of the two missile-types believed to be used in the January attack on U.S. troops at the Al-Assad base in Iraq. That missile attack was retaliation for the killing of Iranian military commander Qassem Soleimani on Jan. 3 by the U.S. military.

Iran’s military ambitions are currently clipped by financial constraints and sanctions. Unable to buy the latest military tech from around the world, it primarily relies on proxies, “hybrid warfare,” naval power, and missile defense, according to an unclassified Pentagon report published in November 2019. The Pentagon keeps a weather eye on Iran’s own missile and rocket development programs, wary of the possibility that the technology could be adapted to carry nuclear warheads.

Iran denies that it has ambitions to develop nuclear weapons.

Its space program is of particular concern since the technology needed to hoist a satellite into space could potentially be converted for use in long-range ballistic missiles.

On Feb. 9, the domestically made Zafar satellite (Farsi for “Victory”) fell short of reaching orbit. It was the third consecutive launch failure since the start of 2019. No Iranian satellite has successfully reached orbit in the past four years.

Officials told state media that the satellite was “successfully” launched and went “90 percent of the way,” reaching an altitude of 335 miles before losing speed in its final moments.

Iran already has the largest fleet of conventional missiles in the Middle East, which is expected to continuing growing in number and accuracy, according to the Pentagon.

The new missile has engines made of composite materials lighter than on earlier steel models, extending the range, according to Iran. It also contains that same terminal precision capability demonstrated during the attack on the U.S. air base in January, according to Defense Update.

That attack followed the Jan. 3 drone strike on Gen. Qassem Soleimani, the head of the Islamic Revolutionary Guard Quds Force, which the United States has designated as a terrorist organization.

Iran responded to Soleimani’s death by announcing it would no longer abide by the terms of the international deal aimed to curb its nuclear ambitions, known as the Joint Comprehensive Plan of Action (JCPOA). Iran has breached the terms of the deal a number of times over the years.

President Donald Trump withdrew the United States from the pact in 2018.

Iran’s military spending rose after the implementation of the Iran Nuclear Deal in 2014 but fell last year for the first time after the Trump administration pulled out and imposed oil sanctions.

Measured with the exchange rate, Iran’s military spending was around $13 billion in 2019, as quoted by the DIA report. However, one analyst previously told The Epoch Times that the figure is potentially misleading.

Using calculations that account for local spending power and lower local wages, Richard Connolly says Iran’s spending is closer to nearly $50 billion—a figure close to the military spending of countries such as the UK and France.