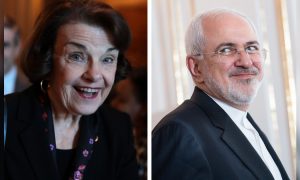 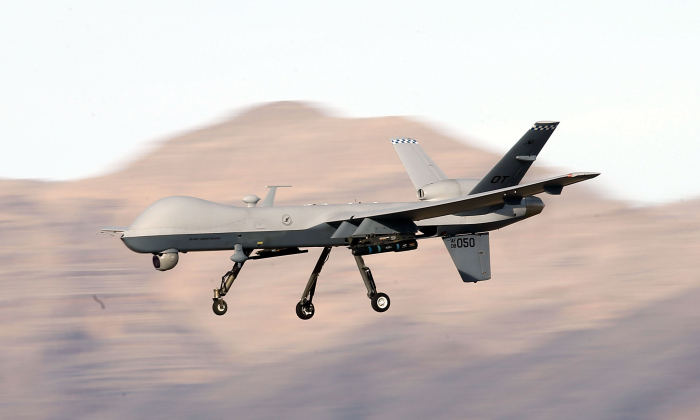 An MQ-9 Reaper drone flies by during a training mission at Creech Air Force Base in Indian Springs, Nevada, on Nov. 17, 2015. (Isaac Brekken/Getty Images)
International

Iran Tried to Shoot Down US Drone at Scene of Tanker Attacks, Report Says

Iran attempted to shoot down a U.S. drone arriving at the scene of two fuel tanker attacks in the Gulf of Oman on June 13, according to a Fox News report that cited a senior U.S. official.

Iran fired a missile targeting an American MQ-9 Reaper drone shortly after it arrived, in response to a distress signal from the tanker Front Altair, which was damaged in an attack that Washington blames on Tehran. The missile missed the drone.

The unidentified official told Fox News that the tanker sent out a distress signal at 6:12 a.m. local time and the unmanned drone arrived eight minutes later.

The missile attack occurred 25 minutes after the drone arrived. Fox News cited a military source to report that the missile was a modified SA-7 fired from mainland Iran.

According to another anonymous Fox News source, Iran-backed Houthi rebels shot down a U.S. MQ-9 drone in recent days.

News of the attempted attack on the U.S. drone adds to mounting tensions in the region. Washington blamed Iran for attacking the oil tankers and released a video that it says shows the Iranian military removing an unexploded mine from one of the tankers, in an alleged attempt to cover up Tehran’s involvement.

Fox News previously reported that Iranian gunboats surrounded a rescue vessel carrying the crew of one of the tankers and forced the surrender of the crew.

The United States also blamed Iran for attacks on four tankers roughly a month prior to the Gulf of Oman attacks.

“This is only the latest in a series of attacks instigated by the Islamic Republic of Iran and its surrogates against American and allied interests, and they should be understood in the context of 40 years of unprovoked aggression against freedom-loving nations,” Secretary of State Mike Pompeo said in a news conference, shortly after the tanker attacks.

Iran threatened to cut the flow of oil through the Strait of Hormuz on April 22, shortly after the United States imposed the strictest sanctions on Tehran’s oil exports intending to cripple the Islamic regime’s oil sector.

Three weeks later, on May 12, Iran attacked four oil tankers near the Strait of Hormuz, according to the White House. Washington also blames Tehran for drone strikes on two oil pipelines in Saudi Arabia on May 14.

On June 12, the day before the latest tanker attacks, an Iran proxy group fired a ballistic missile at a Saudi civilian airport, injuring 26 people.

“Taken as a whole, these unprovoked attacks present a clear threat to international peace and security, a blatant assault on the freedom of navigation, and an unacceptable campaign of escalating tension by Iran,” Pompeo said.

Washington demands that Iran permanently extinguishes its nuclear weapons program, stops the development of nuclear-capable ballistic missiles, terminates its support of radical Islamic terror groups, and puts an end to its malign activities in the Middle East. Pompeo announced the demands in his first major speech as secretary of state in May last year.

Both Washington and Tehran have said they aren’t seeking to start another war in the Middle East.