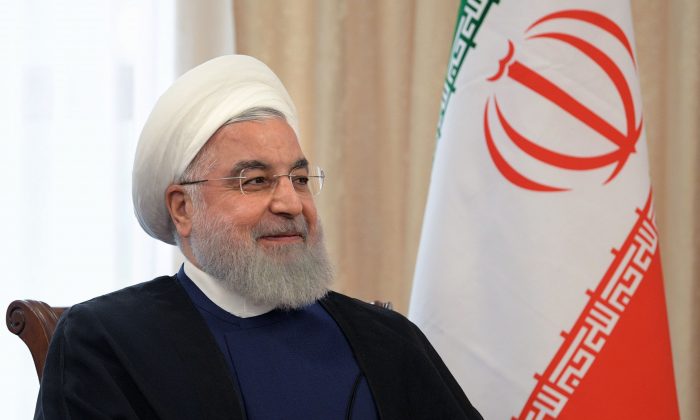 Iran's President Hassan Rouhani attends a meeting with his Russian counterpart on the sidelines of the Shanghai Cooperation Organisation (SCO) summit in Bishkek on June 14, 2019. (Alexey Druzhinin/AFP/Getty Images)
Middle East

Iran Says It Will Violate Nuclear Deal in 10 Days

Iran said on June 17 it would breach an internationally agreed limit on its stock of low-enriched uranium in 10 days, violating a multinational nuclear deal.

A spokesman for the Islamist regime said Iran would remain in the deal if its European counterparts would help circumvent stringent economic sanctions imposed by the United States.

Tensions between Iran and the United States have heightened further since the Trump administration presented video evidence that appears to implicate Tehran in the June 13 attacks on two oil tankers in the Gulf of Oman, a vital oil shipping route. Iran has denied having any role.

“We have quadrupled the rate of enrichment and even increased it more recently, so that in 10 days, it will bypass the 300 kg limit,” Iran’s Atomic Energy Organization spokesman Behrouz Kamalvandi said on state TV. “There is still time … if European countries act.”

“Iran’s reserves are every day increasing at a more rapid rate. And if it is important for them [Europe] to safeguard the accord, they should make their best efforts… As soon as they carry out their commitments, things will naturally go back to their original state.”

Tehran said in May it would reduce compliance with the nuclear pact it signed with world powers in 2015, to protest the United States’ decision to unilaterally pull out of the agreement and reimpose sanctions last year. The UK, Russia, France, China, Germany, and the European Union are still part of the accord.

The deal required Iran to curb its uranium enrichment capacity to head off any pathway to developing a nuclear bomb, in return for the removal of most international sanctions.

A series of more intrusive United Nations inspections under the deal have verified that Iran has been meeting its commitments, but a trove of documents retrieved by Israeli intelligence showed that the regime preserved its nuclear program research archives.

The accord caps Iran’s stock of low-enriched uranium at 300 kg of uranium hexafluoride enriched to 3.67 percent, or its equivalent, for 15 years.

Kamalvandi added: “There is still time for the Europeans … But the Europeans have expressed indirectly their inability to act. They should not think that after 60 days [deadline set in May by Iran], they will have another 60-day opportunity.”

The west European signatories to the deal—France, the UK, and Germany—have defended the nuclear accord as the best way to limit Iran’s enrichment of uranium.

Iran has repeatedly criticized delays in setting up a European mechanism that would shield trade with Iran from U.S. sanctions in an effort to save the agreement.

The United States and the International Atomic Energy Agency believe Iran had a nuclear weapons program that it abandoned. Tehran denies ever having had one.

Secretary of State Mike Pompeo said on June 16 the United States doesn’t want to go to war with Iran but would take every action necessary, including diplomacy, to guarantee safe navigation through vital shipping lanes in the Middle East.

The International Atomic Energy Agency, the U.N. atomic watchdog, declined to comment. Its chief, Yukiya Amano, said last week that he was worried about rising tensions around Iran’s nuclear program and hoped they could be resolved through dialogue.

China’s Foreign Ministry didn’t immediately respond to a request for comment. Britain’s Foreign Office had no immediate comment. Dutch Foreign Minister Stef Blok said June 17 the EU wanted to stick to the Iran nuclear deal but that Iran needs to do the same.