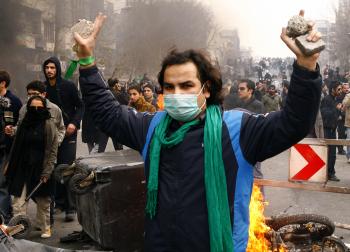 Ali Habibi Mousavi, Mir Hossein Mousavi’s nephew, has been confirmed by Iran state media to be one of the five killed.

The head of Security in Iran has denied the use of any guns, however, several different sources claim the nephew of Mousavi was shot in the back.

Conflicting reports online from opposition websites put the death toll up to ten, while another 300 protestors reportedly have been taken into custody as public protests have become as frequent as a daily occurrence across all major Iranian cities including Isfahan, Shiraz, and the holy Shi’ite city of Qom.

Several websites also showed unofficial video of an Iranian opposition protester being run over my a Iranian police car.

Sunday’s violence comes the day after the former president, Mohammad Khatami, was interrupted by the Basijii military as they stormed the prayer hall in the house of the former Supreme Leader of Iran, Ayatollah Khomeini, attacking many audience members as the former president was escorted out by his bodyguards.

Tensions have risen in the past week after commemorative ceremonies for the late Grand Ayatollah Hussein-Ali Montazeri—the father of the reformist movement in Iran—turned violent sparking a revitalization of the post-election protests that took place in June.

The Iranian Regime led by president Ahmadinehjad has turned into what one White House official last week called a police state.

Mehdi Karoubi, a moderate, who along with Mir-Houseen Mousavi ran in opposition to Ahmnadinejad in the presidential elections, spoke out about the violence on the day of Ashura.

"What government would come to disturb [the Holy Day] of Ashura,” said Karoubi. "Even Shah respected Ashura and let people be free to do as they wish…The sins you have committed on Ashura can't be forgiven."

“In this attack, they beat up people including men and women and while humiliating and scolding them destroyed their property and by breaking doors and windows by Imam’s [Ayatollah Khomeini] house created [an atmosphere of] fear and terror.”

U.S. National Security Council Spokesman Mike Hammer condemned the violence in a statement released on Sunday.
“We strongly condemn the violent and unjust suppression of civilians in Iran seeking to exercise their universal rights. Hope and history are on the side of those who peacefully seek their universal rights, and so is the United States,” said Hammer.

"Governing through fear and violence is never just, and as President Obama said in Oslo—it is telling when governments fear the aspirations of their own people more than the power of any other nation," Hammer added, referring to President Obama’s Nobel Peace Prize acceptance speech.

The violence against public protests has become more prevalent as the year-end deadline for a U.N. brokered deal—allowing trade for Iran’s enriched uranium for nuclear fuel for use within nuclear power plants—comes to a close.

The Iranian Regime has made a few mild diplomatic verbal concessions as International pressure has dramatically increased, however, little action has been taken on part of the regime.

International policy and diplomacy become ever more complex, as public protests in Iran reach a level on par with resentment towards the Shah’s regime prior to the Islamic Revolution of 1979.