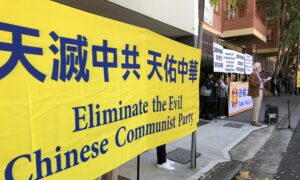 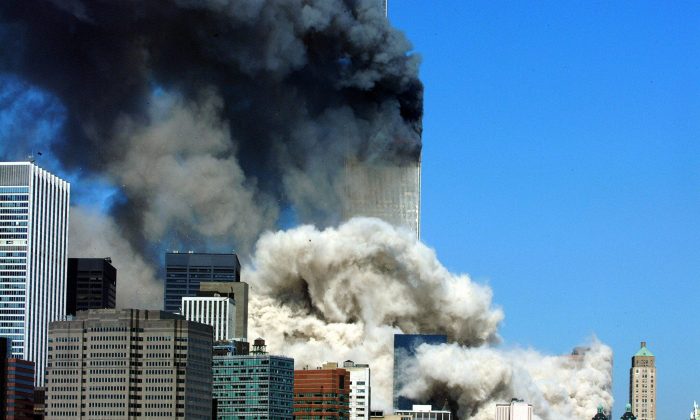 This 11 September, 2001 file photo shows smoke billowing up after the first of the two towers of the World Trade Center collapses in New York City. (HENNY RAY ABRAMS/AFP/Getty Images)
International

It’s a victory for the families, albeit a hollow one, since Iran has never officially responded to the lawsuit, Burnett, Sr. et al v. The Islamic Republic of Iran et al. Iran is also unlikely to ever pay. Nonetheless, the largely symbolic judgment still carries significant meaning, as it could set a precedent for similar lawsuits against tyrannical regimes.

Plaintiffs are still seeking billions of dollars from Saudi Arabia.

On top of that, a 4.96 percent annual interest rate will also be added to the amount, starting from the day of the terror attack.

The lawsuit was originally filed in 2004 but was not allowed to proceed until 2016, after Congress passed the Justice Against Sponsors of Terrorism Act that allowed sovereign governments accused of terrorism to be held liable.

The court ruling comes just after a trove of Iranian documents obtained by Israeli intelligence revealed that Iran had lied to the world about its nuclear program.

Saudi Arabia is still the main target of U.S. families seeking damages, as 15 of the 19 hijackers were Saudi citizens. The ruling against Iran is part of a broader case seeking to hold Saudi Arabia responsible for the 9/11 attacks.

Plaintiffs are still seeking billions of dollars from Saudi Arabia.

According to the lawsuit, Iran supported the hijackers with training and other assistance. But the 9/11 Commission, whose task was to review the circumstances around the attacks, found no evidence of direct Iranian involvement.

The commision only found that some of the 9/11 hijackers traveled through Iran en route to Afghanistan without having their passports stamped.

On Sept. 11, 2001, hijackers crashed commercial airliners into the World Trade Center in New York and the Pentagon near Washington. Meanwhile, another plane aiming for the White House crashed into a field in Pennsylvania, after passengers confronted the hijackers.