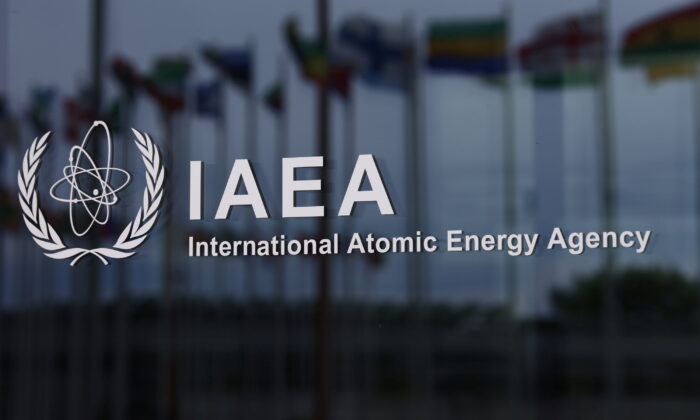 The logo of the International Atomic Energy Agency (IAEA) is seen at the IAEA headquarters, amid the coronavirus disease (COVID-19) pandemic, in Vienna, Austria, on May 24, 2021. (Lisi Niesner/Reuters)
Middle East

VIENNA—Iran is starting to operate a new workshop at Natanz that will make parts for uranium-enriching centrifuges with machines moved there from its now-closed Karaj facility, the U.N. nuclear watchdog said in a report on Thursday seen by Reuters.

The new workshop raises questions about Iran’s plans for the manufacturing of advanced centrifuges—machines that produce enriched uranium much faster than the first-generation machines it was restricted to using for that purpose by its 2015 deal with major powers.

It is now enriching with hundreds of advanced centrifuges, some of them enriching to a purity of up to 60 percent, close to the 90 percent that is weapons-grade. That is far above the 3.67 percent cap imposed by the deal and the 20 percent it had achieved before the deal.

In its confidential report to member states the International Atomic Energy Agency (IAEA) said it had finished installing surveillance cameras at the location on April 12 and had then removed the seals from the machines. The agency did not say where at Natanz that location was.

The workshop’s precise location is of particular interest to Western powers and Iran’s arch foe Israel because Karaj was struck by what Tehran says was a sabotage attack by Israel. Tehran has since been seeking to ensure greater security for such sites.

The sprawling Natanz site includes a commercial-scale enrichment plant that is underground, which could offer some protection from any potential airstrikes.

“On 13 April 2022, Iran informed the Agency that the machines would start operating at the new workshop the same day,” the report said, without saying whether it had verified that the machines had started operating, suggesting it had not had access to the location since then.

Under an agreement with Iran struck more than a year ago, the IAEA does not have access to the data collected by cameras and other monitoring equipment from some locations, such as centrifuge-parts workshops.

Before moving the Karaj parts to Natanz, Iran had also told the IAEA it was moving the Karaj workshop’s activities to another site at Isfahan, and the IAEA has set up cameras there. If Isfahan went into operation, that would be a big increase in Iran’s capacity to produce advanced centrifuge parts.