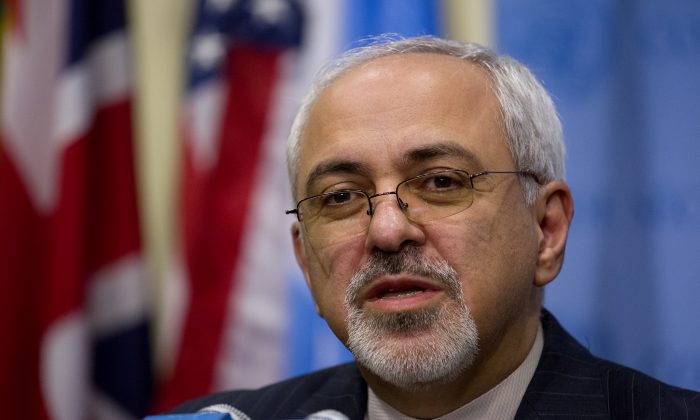 Iranian Foreign Minister Mohammad Javad Zarif speaks to the media after meeting of the five permanent members of the Security Council plus Germany during the 68th session of the United Nations General Assembly at U.N. headquarters, Thursday, Sept. 26, 2013. (AP Photo/Craig Ruttle)
Middle East

Zarif’s comments mark a turn in seemingly positive negotiations in recent days between U.S. and Iranian officials on Iran’s nuclear program. Zarif was upset that Obama assumed Iran’s willingness to negotiate is primarily motivated by a wish to be relieved of sanctions and to avoid further sanctions.

Netanyahu threw a “wet blanket” on Iran’s “charm offensive,” as CBS journalist Pamela Falk described it. Netanyahu is skeptical Iranian President Hasan Rouhani will make promised concessions on the nation’s nuclear program, though Rouhani said during U.N. disarmament talks last week he is dedicated to reaching an agreement with the United States and other international powers in three to six months or sooner.

After a meeting of the P-5+1 with Zarif, Secretary John Kerry issued a statement on Sept. 26. The P-5+1 is a group of five nations that are permanent members of the U.N. Security Council (United States, Russia, China, U.K., France) plus Germany, which have joined diplomatic efforts in regard to Iran’s nuclear program.

Kerry said: “We’ve agreed to try to continue a process that we’ll try to make concrete, to find a way to answer the questions that people have about Iran’s nuclear program.

“Needless to say, one meeting and a change in tone, which was welcome, doesn’t answer those questions yet, and there’s a lot of work to be done. So we will engage in that work, obviously, and we hope very, very much – all of us – that we can get concrete results that will answer the outstanding questions regarding the program. But I think all of us were pleased that the Foreign Minister came today, that he did put some possibilities on the table. Now it’s up to people to do the hard work of trying to fill out what those possibilities could do.”

[View the story “Iran’s FM vs. Obama ” on Storify]