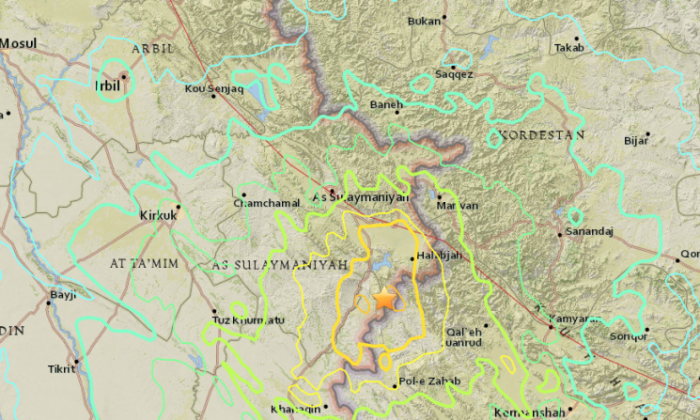 At least six people have been killed by a major earthquake that shook a large area on the Iran-Iraq border 217 miles north of Baghdad on Sunday, Iranian state TV reported according to The Independent.

Scores of people were injured in the border city of Qasr-e Shirin in Iran, state TV reported. At least eight villages have been damaged.

Photos and videos of extensive damage in both Iran and Iraq poured in on social media shortly after the earthquake.

A video recorded at a cafe in Sulaymaniyah, Iraq, shows a crowd rushing out as tremors shake the building and shatter glass.

7.5 şiddetli depremin bir kafe’nin güvenlik kamerasıdan.
The Heavy #Earthquake in CCTV of one of the cafes in #Sulaymaniyah .#Kurdistan pic.twitter.com/Opj4Hq4IBm

According to the U.S. Geological Survey, the quake struck 15.5 miles beneath the surface about 20 miles from Halabjah, Iraq.

Many residents in the Iraqi capital of Baghdad rushed out of houses and tall buildings in panic.

“I was sitting with my kids having dinner and suddenly the building was just dancing in the air,” said Majida Ameer, who ran out of her building in the capital’s Salihiya district with her three children. “I thought at first that it was a huge bomb. But then I heard everyone around me screaming ‘Earthquake!'”

There were similar scenes in Erbil, the capital of the semi-autonomous Kurdistan Region, and across other cities in northern Iraq, close to the quake’s epicenter.

Another video shows what appears to be a collapsed segment of an elevated road. The earthquake appears to have completely destroyed the structure.

"@diyarkurda: #Kurdistan Region of #Iraq #earthquake : Footage shows the devastation of quake on the people's home in #Darbandikha near #Sulaymaniyah pic.twitter.com/FtE8mmTiQH"

The quake was even felt in the Iranian capital Tehran, with some villages hit by power outages, Iranian state TV reported.

“The quake was felt in several Iranian provinces bordering Iraq. … Eight villages were damaged. … Electricity has been cut in some villages and rescue teams have been dispatched to those areas,” TV reported.

Photos posted by a person from Iran show a shattered building and cracked walls in the city of Baneh in west Iran.

Iraq’s Meteorological Organization issued a warning on state TV urging people to stay away from buildings and to avoid from using elevators, CNN reported.

Residents of Turkey’s southeastern city of Diyarbakir also reported feeling a strong tremor, but there were no immediate reports of damage or casualties in the city.

Israeli media said the quake was felt in many parts of Israel too.

A collapsed building is seen on top of a crushed car in a photo taken in Kermanshah Province in Iran.

The Turkish president announced that the country will deploy 3,000 tents, 10,000 blankets, 3,000 heaters and 10,000 beds to aid the victims of the disaster, EHA News reported, citing the Red Crescent.

? | A Market in #Suleymaniyah after the Earthquake in Northern #Iraq pic.twitter.com/xzV09tuYsB

Extensive damage is seen in photos taken in the town of Darbandikhan in Iraq.