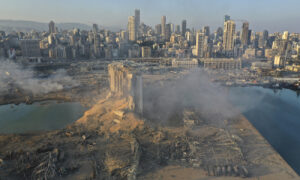 DUBAI—An explosion onboard an Iranian bus in Damascus was not caused by a bomb, the Syrian interior minister has said.

Saeed Sammur denied earlier media reports that the explosion, which killed three people on Thursday, was caused by terrorists.

“It is not a terrorist act at all,” Sammur told journalists at the scene. “It happened while one of the empty bus’s tires was being repaired. An explosion took place as result of the excessive pressure.

“Two workers who were repairing the tire and the bus driver, who was standing near them, were killed in the explosion.”

Regional television had reported that the explosion had been caused by a bomb or a gas canister among the luggage onboard.

The incident took place near a Shi’ite shrine in the Sayeda Zeinab district of the city, which draws thousands of pilgrims from Iran, Iraq, and Lebanon each year.

Although, terrorist attacks are rare in Damascus, the Sayeda Zeinab district was hit by a car bomb on Sept. 27, 2008, which killed 17 people and wounded 14 others.