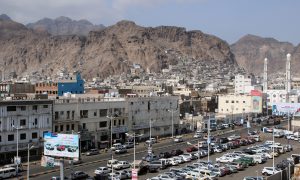 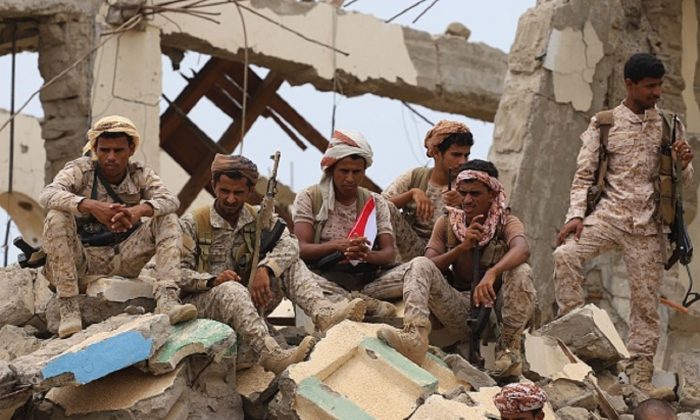 Saudi-backed Yemeni fighters gather above debris of a building while watching the launch by Saudi Development and Reconstruction Program for Yemen (SDRPY) of multi-million dollar aid projects in the area of Yemen's northern coastal town of Midi, located in conflict-ridden Hajjah governorate near the border with Saudi Arabia, on April 22, 2019. (AFP/Getty Images)
Middle East

CAIRO—Yemen’s Iran-backed Houthi movement said on Saturday that it carried out drone attacks on warplane hangars and other military sites in Jizan airport in southern Saudi Arabia, the group’s Al-Masirah TV reported.

There was no Saudi confirmation of the attacks.

The Houthis, who are fighting a Saudi-led coalition in Yemen, have repeatedly launched attacks against targets in neighboring Saudi Arabia. Member countries of the Arab Coalition, led by Saudi Arabia and the UAE, lead a successful push for the Houthis to be designated a terrorist group by the Arab Parliament on June 19.