Nasdaq Cracks Down on IPOs of Small Chinese Companies
0 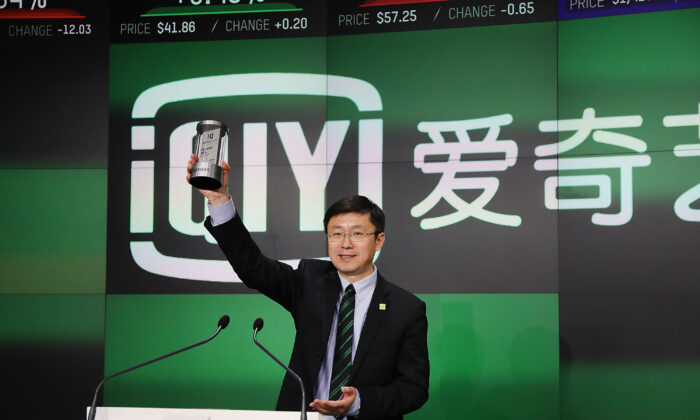 China streaming video leader iQiyi, the “Netflix of China,” is accused by a research firm and a short seller of committing a similar securities fraud exposed at Luckin Coffee, the “Starbucks of China.”

Global financial research firm Wolfpack Research issued a public report stating that iQiyi, Inc. has “massively [inflated] its user numbers and revenue while at the same time hiding the fraud from auditors and investors by overpaying for content, acquisitions, and other assets” prior to its high-profile March 2018 initial public offering in the United States that raised over $2.25 billion.

Beijing-based iQiyi was founded in 2010 as part of China’s multinational internet-related services and artificial intelligence giant Baidu, Inc. The company has generated over 30 original production series. In 2015, it bought the streaming rights to eight of China’s top shows, and several entertainment series from Taiwan and South Korea.

With 455 million monthly average users (MAUs), compared to 167 million MAUs for Netflix, iQiyi’s market capitalization almost doubled in its first month of trading to over $23.3 billion. Wall Street analysts attributed the turmoil from the Sino-U.S. trade war and the COVID-19 pandemic for pushing the stock valuation down to $12.7 billion.

Wolfpack Research was launched last year by activist short seller Dan David. Its mission is to expose U.S. and foreign publicly listed companies that engage in fraud and other wrongdoings.

Investment firm Muddy Waters exposed Luckin Coffee’s fraudulent activities in January. The stock of Luckin Coffee plunged by over $5.5 billion after the company admitted on April 2 that its chief operating officer and other insiders may have fabricated $310 million in sales in 2019. The Luckin stock crash has also endangered the balance sheets of Haitong Securities, Morgan Stanley, and Credit Suisse that loaned Luckin’s CEO $340 million based on the value of his stock.

Wolfpack’s highly-footnoted 37-page report alleges that iQiyi’s 2019 revenues in China were inflated by 8 to 13 billion yuan, or $1.15 to $1.85 billion, by “misrepresenting its number of paying subscribers, the average membership period, or both.”

Users have to pay for iQiyi’s VIP membership either directly or through partners like e-commerce site JD.com and Xiaomi. Wolfpack alleged that around half of iQiyi’s VIP users got the membership for free or through a cheap deal from these partners. iQiyi accounts for dual memberships on a “gross basis,” which means “it records the full amount of revenue and records its partners’ share as expenses.”

“This allows IQ to inflate its revenues and burn off fake cash at the same time,” Wolfpack Research claimed.

The alleged accounting misstatements are similar to the fraud charges brought by the U.S. Securities and Exchange Commission (SEC) against the influential internet analytics firm Comscore that measures web traffic. According to the SEC, Comscore and its former CEO “engaged in a fraudulent scheme to overstate revenue by approximately $50 million and making false and misleading statements about key performance metrics.” Former CEO Serge Matta and the company settled the allegations for $5.7 million in Sept. 2019. Matta was also forced to repay $2.1 million to Comscore and was banned by the SEC from serving as an officer or director of a public company for the next 10 years.

iQiyi issued a statement on April 8 asserting that the report from Wolfpack Research “contains numerous errors, unsubstantiated statements and misleading conclusions and interpretations.” The company added that it continues to maintain “high standards of corporate governance and internal control” in compliance with all U.S. securities regulations.

iQiyi is one of 66 Chinese companies listed on America’s NASDAQ Exchange, and a top technology issue in the tech-heavy NASDAQ Golden Dragon China Index.