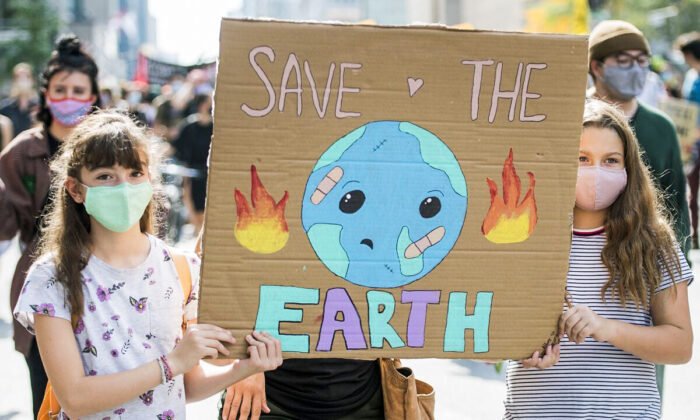 IPCC’s ‘No One Is Safe’ Slogan Is Deeply Misleading: Shellenberger

The message stated in the Intergovernmental Panel on Climate Change’s (IPCC’s) report, warning that “nobody is safe” from human-caused climate change is “irresponsible and misleading,” according to longtime environmental activist Michael Shellenberger.

The IPCC published a report in August stating that human-caused climate change is accelerating and that radical changes to human behavior are needed to avert disaster.

Following the findings, U.N. Secretary General António Guterres said of the report that the “alarm bells are deafening” and the situation is a “code red for humanity.”

Meanwhile, Inger Andersen, executive director of the United Nations Environment Programme (UNEP), said the findings showed that “nobody is safe. And it is getting worse faster.”

However, Shellenberger, who is the founder and president of the nonprofit Environmental Progress and the author of “Apocalypse Never: Why Environmental Alarmism Hurts Us All,” disagrees with this sentiment.

In an interview with EpochTV’s “American Thought Leaders,” Shellenberger noted that while climate change is a very “real” thing, the slogan that no one is safe is “misleading” to the general public.

“Climate change is real. The world is getting warmer, it’s gotten about one degree Celsius warmer since the pre-industrial period. But on so many other environmental metrics, things are going in the right direction,” Shellenberger said.

“The hottest the period of worst heat waves, for example, was in the 1930s. It has been a hot decade, but the 1930s remained the highest magnitude of heat waves. The chance of dying from an extreme weather event has declined over 99 percent for the average human being.

“Deaths from natural disasters overall are 90 percent down, we produce 25 percent more food than we need. There’s no estimate of running out of food.”

“So what I object to is the painting of humans as sort of fragile or super vulnerable. We’ve never been more brilliant, we’ve never been less vulnerable, at least at a physical level. I think we’re seeing some rising anxiety and depression, particularly [among] young people, probably due to social media. But physically humans are safer than ever.”

“But I think the the message that people need to hear that they’re not hearing is that the vast majority of environmental trends are going in the right direction, including on climate change.”

Shellenberger went on to call the communications in the IPCC’s report “irresponsible,” stating that, owing to more modern infrastructure, among other things, humans are are 99 percent less likely to die from extreme weather than they were previously.

“The communications from the United Nations have been irresponsible. The slogan that they published the day of the IPCC reports publication was ‘no one is safe’ … It’s deeply misleading in that we’re safer than ever,” he said.

“We just look around us [to see] we have a built infrastructure, go on YouTube and look at what life was like in 1800 or 1900, we were just much more vulnerable to weather events back then.”

Shellenberger referenced a Financial Times graphic depicting the rate of climate change based on the IPCC’s findings, noting that “if you make your graph tall enough, and you cherry pick a particular period of time, you can make anything look scary … It’s really what they don’t show you.”

The longtime environmental activist said that the public fails to be informed about other aspects that protect them from climate change, such as large increases in food surpluses and incredible flood management systems.

He also noted that in Europe, more people live in areas where floods historically occur, such as riverbanks, and it was not because of a modest amount of more rain that more people experienced floods in Europe.

“So we see in all these problems, whether it’s forest fires, or floods, or hurricanes, that what humans do on the ground massively outweighs any increase in wind speed or precipitation or air temperatures,” he explained.

Shellenberger noted that while the natural science reviewed by the IPCC is accurate, “the vast majority of the distortions and the pessimism regarding climate change appears in the summary in the statements by those who helped assemble the report.

“So it’s really in the public relations that the distortions are occurring. However, in this most recent report, there was some bad behavior in the actual scenarios they constructed,” the author continued.

“So about half of the scenarios assume much higher levels of emissions, and therefore higher levels of warming in the future, than really any mainstream expert believes is possible,” he added.