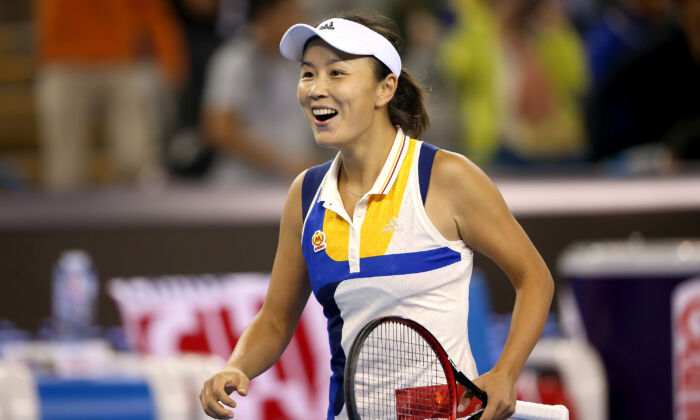 Olympic officials appear to have secured the first chance to reach the disappeared Chinese tennis star Peng Shuai, as sports officials outside of China were eager to hear directly from the player.

According to a press release from the International Olympic Committee (IOC), Peng told IOC officials in a video call from Beijing on Nov. 21 that she was safe and well.

Until now, efforts from those outside of China to contact former doubles world number one via various methods have led nowhere.

Growing concerns around the globe over Peng’s whereabouts have led to further calls to boycott the upcoming Beijing 2022 Olympics—a prestige event for the CCP—with critics of the regime saying that the safety of athletes now seems not guaranteed by the host country. The women’s professional tour threatened to pull its events out of China unless Peng’s safety can be assured.

Beijing had been keeping its response to the accusations low-key—until last week. Chinese authorities and state-controlled media then released emails claimed to be written by Peng, as well as photos and clips of Peng in what many suspect is an attempt to quell concerns for safety.

Now, the IOC’s Terho, a hockey player from Finland who represents athletes on the IOC executive board, has said that Peng “appeared to be relaxed” following a real-time virtual chat with Olympic officials—who had remained quiet about the status of Peng until the past weekend.

According to the Switzerland-based Olympic body, Peng “thanked the IOC for its concern about her well-being.”

“She explained that she is safe and well, living at her home in Beijing, but would like to have her privacy respected at this time. That is why she prefers to spend her time with friends and family right now,” the statement said.

A post on the Twitter-like Weibo account of the 35-year-old Grand Slam doubles champion alleged in Peng’s voice on Nov. 2 that former Chinese vice premier Zhang Gaoli, 75, coerced her into sex before she became his mistress. Although China’s internet censors deleted the post in half an hour, the high-profile allegation swirled online.

“I couldn’t describe how disgusted I was … I feel like a walking corpse,” Peng seems to have written on her verified Weibo account.

The apparent reappearance of Peng adds to a growing number of Chinese businesspeople, activists, and ordinary citizens who have disappeared in recent years after criticizing party figures, or in crackdowns on corruption, or pro-democracy and labor rights campaigns.

Some reemerge weeks or months later without explanation, suggesting that they are warned not to disclose what happened to them during their period of silence.

The CCP has given no indication whether it is investigating Peng’s accusation against Gao, who left the CCP’s ruling Standing Committee in 2018 and has largely disappeared from public life. Appeals in China often face imprisonment and other penalties for embarrassing the party by publicizing complaints about abuses instead of going through the secretive, often unresponsive official system.

The IOC said on Nov. 20 that it would continue its “open dialogue on all levels with the Olympic movement in China.”

Asked two weeks ago about human rights in China, senior IOC member Juan Antonio Samaranch said, “We are not discussing with the Chinese government anything” about that subject.