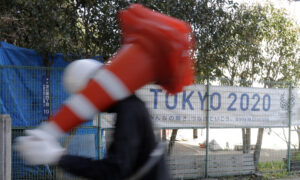 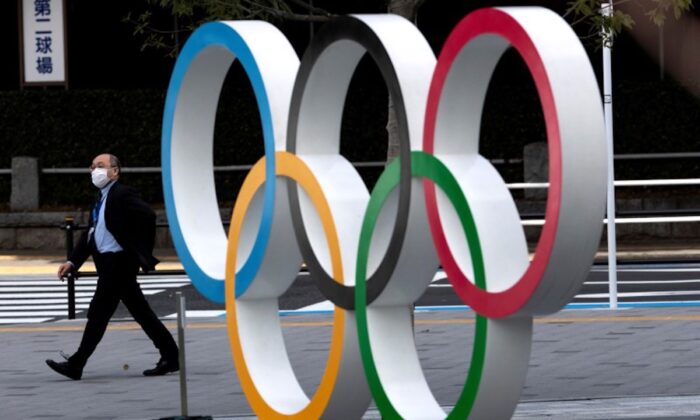 A man wearing a protective mask, following an outbreak of the coronavirus disease (COVID-19), walks past walk past the Olympic rings in front of the Japan Olympics Museum in Tokyo, Japan, on March 13, 2020. (Athit Perawongmetha/Reuters)
Sports

Major sporting nations Australia and Canada had already withdrawn on Monday as organizers came under global pressure to postpone the event for the first time in the Olympics’ 124-year modern history.

“On the basis of the information the IOC has, postponement has been decided,” Pound was quoted as saying by the U.S. newspaper. “The parameters going forward have not been determined, but the Games are not going to start on July 24, that much I know.”

The report said the games, scheduled for July 24-Aug. 9, were likely to be held in 2021, with the details to be worked out in the next four weeks.

A postponement would be a massive blow for the host country, Japan, which has pumped in more than $12 billion of investment, and huge sums are also at stake for sponsors and broadcasters.

But a groundswell of concern from athletes—already struggling to train as gyms, stadiums and swimming pools close around the world—appears to be tipping the balance, along with the cancellation of other major sports events.

The IOC and the Japanese government have both edged back from weeks of blanket insistence the Games would go ahead, announcing a month-long consultation on scenarios including postponement.

Mike Ryan, head of the WHO’s emergencies program, said the WHO was feeding into deliberations over the Games, adding: “I believe a decision will be made very soon.”

The Olympics have never before been delayed, though they were canceled altogether in 1916, 1940 and 1944 during the two world wars, and major Cold War boycotts disrupted the Moscow and Los Angeles Games in 1980 and 1984 respectively.

“The moment the IOC indicates that it is thinking about other solutions, it has already decided to delay the Games,” said French Olympic Committee president Denis Masseglia.

Canada and Australia both bluntly said they would not participate if the Games were not put back to 2021 and Britain may have followed suit. The Swiss Olympic Committee also called for a postponement, saying a fair, global Games was not currently possible.

“Our athletes have been magnificent in their positive attitude to training and preparing, but the stress and uncertainty have been extremely challenging for them,” said Australia’s Olympics Chef de Mission, Ian Chesterman.

Paralympic athletes may be at particular risk from the epidemic as some have underlying health problems.

But a raft of other nations and sports bodies piled pressure on the IOC—and its German president Thomas Bach, a former Olympic fencing champion—to make a quick decision.

“The faster the decision, the better it is for the entire Olympic movement,” Greece’s Olympic head, Spyros Capralos, a former water polo player, told Reuters.

“I understand where the athletes are coming from,” he added. “When you cannot train, you are stressed, you live in agony, which is disastrous. Postponement is inevitable.”

By Steve Keating and Leika Kihara