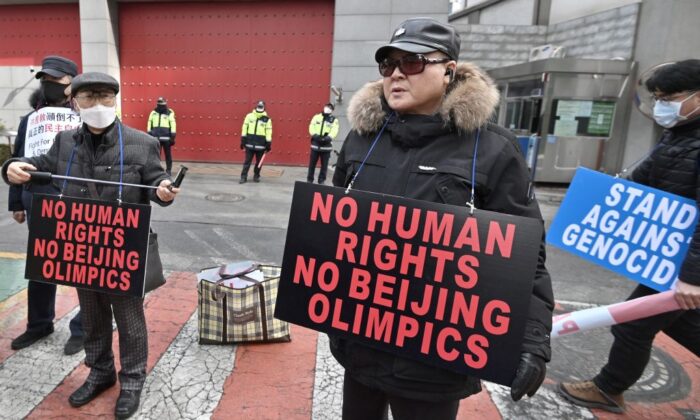 While the IOC’s audit on forced labor shows a step towards transparency, it contained “significant gaps”, human rights groups say.
By Gary Bai

In its Jan. 19 statement, the IOC said it conducted an audit on its suppliers of branded products with “due diligence”—a United Nations framework describing corporations’ responsibilities in upholding human rights—and “did not find any forced, bonded, indentured or child labor.”

However, the IOC’s audit lacks both transparency in results and an “analysis of suppliers’ responsible sourcing practices,” said rights groups Human Rights Watch (HRW) and the Coalition to End Forced Labour in the Uyghur Region (EUFL) in a Feb. 14 statement.

Activists are calling on the International Olympic Committee (IOC) to disclose how it audited its suppliers for evidence of forced labor, citing concerns that the audit was not comprehensive enough to ensure that apparel for the 2022 Winter Olympics is “abuse-free.”

The IOC’s audit was the first attempt by the sports organization to conduct a due diligence review of Beijing 2022 products. However, the rights groups allege the report lacks the necessary details to ensure credibility.

The missing particulars include “details about the factories and production sites visited, the audit methodology and findings, or the steps taken to ensure that workers were not subject to reprisals for speaking to auditors or reporting violations,” read the rights groups’ statement.

However, according to Bennett Freeman, a Steering Committee member of EUFL and former US Deputy Assistant Secretary of State for Democracy, Human Rights and Labor, the report does not address the crucial context of the state-run persecution of the Uyghur minorities.

“The IOC’s due diligence is of such narrow scope that its findings cannot be accepted,” Freeman said in the statement. “Crucially, the IOC’s January statement doesn’t even mention the forced labor of Uyghur people, the primary risk that should have been the focus of the exercise.”

The IOC’s due diligence report said the audit involved two suppliers, Hengyuanxiang Group (HYX Group) and Anta Sport, which are also the subjects of a Jan. 12 letter from the U.S. Congressional-Executive Commission on China (CECC) to IOC President Thomas Bach. According to the IOC, both suppliers denied using cotton from Xinjiang, directly contradicting the U.S. lawmakers’ allegations.

“The IOC’s statement also included no information on what steps, if any, the IOC took to verify companies’ claims about the origin of the materials used in IOC products,” the rights groups’ statement said.

Neutrality ‘Does Not Apply’

When asked about the Chinese regime’s human rights abuses, the IOC cited its principle of being politically neutral.

In a Feb. 3 press conference, Bach told reporters that “the position of the IOC must be, given the political neutrality, that we are not commenting on political issues,” he said. “Because otherwise, if we are taking a political standpoint, and we are getting in the middle of tensions and disputes and confrontations between political powers, then we are putting the Olympics at risk.”

However, according to the rights groups, the principle of neutrality does not apply in this case. “The IOC cannot be allowed to let so-called neutrality override morality when it comes to slave labor,” said Zumretay Arkin, World Uyghur Congress Program and Advocacy Manager, in a Jan. 4 statement published on EUFL.

“Olympic leaders must take responsibility for labor and human rights at a time when the reality of forced labor of the Uyghur people is now widely recognized and condemned around the world,” Arkin added.