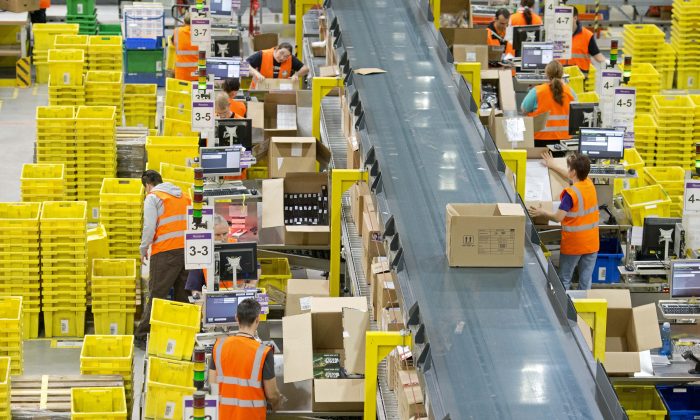 Investors’ Patience With Amazon Running Out

Jeff Bezos is among a handful of men who resembles the modern day Steve Jobs. To own shares of Amazon.com Inc. is to have faith in Bezos’s vision.

But that faith was shaken last week after Amazon revealed its latest quarterly results—another disappointment in a string of underwhelming earnings announcements.

Amazon is a tough company to pin down. It has stakes in multiple industries and spends cash on developing seemingly every product under the sun.

Amazon is the biggest online retailer, and in that sense it competes with brick-and-mortar retailers such as Wal-Mart Stores Inc. and Target Corp. It also streams videos online and funds Hollywood-style film and television productions, pitting it against Netflix Inc. It makes tablets and, more recently, mobile phones, competing against technology giants Google Inc. and Apple Inc. It is also investing in online grocery deliveries, website hosting, and is already a big player in cloud computing.

In other words, Bezos is a busy man and Amazon is a far-reaching organization that must spend billions of dollars a year to develop a slew of unrelated new products—and must compete with well-heeled rivals on many fronts.

All of this would be cheered by Wall Street if such spending paid off in the form of tangible returns. But so far, profitability has eluded investors.

Its fiscal second-quarter loss was $126 million, the biggest since 2012. Topline revenues were up 23 percent to $19.3 billion, but operating expenses rose 24 percent, to $19.4 billion—including a 40 percent increase in spending on technology and content.

Last week’s losses had less to do with the past and more with the future. Investors realized that the spending spigot would remain wide open for some time.

Amazon projected an operating loss of up to $810 million for the third quarter, including more spending on R&D, investments, and acquisitions.

The phone joins a stable of hardware devices such as the Kindle that sells for cost. Amazon intends to recoup the profits from selling subscriptions such as Amazon Prime video, magazines, and books. But its Prime membership is a double-edged sword. The included free two-day product shipping cuts into profits, and the company’s video-streaming service has failed to dent the growth of Netflix.

Amazon Web Services (AWS), the company’s cloud computing platform, had to endure price cuts that decreased profitability executives said on last week’s earnings call with analysts. While Amazon does not bifurcate revenues for the division, it generates the majority of what is considered “other” revenues for the company.

While the $1.2 billion revenues for other revenues represent a 30 percent growth from the prior quarter, it was still disappointing considering that it had grown at a 50 percent clip and Amazon had high hopes for the AWS division.

AWS still represents a major bright spot for the company’s future. Bezos in the past claimed that it would someday surpass the retail business. But it looks as if AWS’s growth may not be as exponential as previously thought, especially as rivals such as Google, Microsoft, and IBM invest heavily in promotions and price cuts.

Its trailing-12-month price to earnings ratio sits at an absurd 852. Its price to free cash flow ratio is almost 144, more than three times the average for the retail sector.

While Amazon shares will likely recover this week as some investors buy on the dip, it will take some tremendous future growth to justify its current $324 per share.