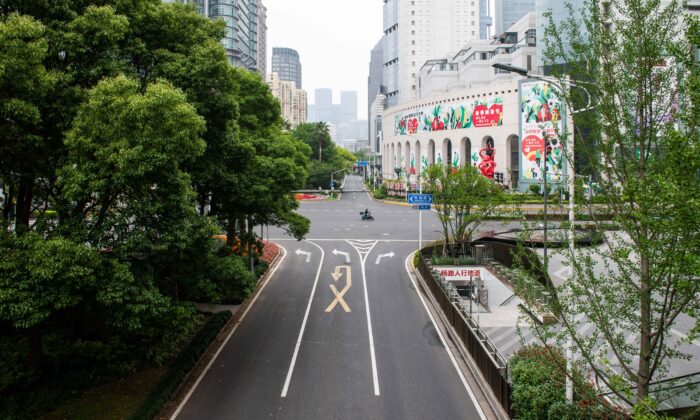 A general view shows a road during a COVID-19 lockdown in the Pudong district of Shanghai, China, on May 30, 2022. (Liu Jin/AFP via Getty Images)
Thinking About China

China investment risk is rising due to the ongoing threat of COVID-19 lockdowns, possible sanctions for Beijing’s support of Russia and the Burmese military government, as well as long-term damage done to the Chinese economy by Xi Jinping’s campaigns to crack down on the tech, education, and property sectors.

Investor confidence surveys find that the United States is believed to be the world’s safest destination for foreign direct investment (FDI). China was the fourth largest recipient of FDI in 2020 but has now fallen to 10th place in terms of investor confidence.

Additionally, the Federal Reserve rate hikes have made the United States an increasingly attractive destination for investment. This will most likely increase capital outflows from China, driving down the value of the yuan.

In its annual ranking, the Eurasia Group identified China as a major risk to the global economy in 2022. Eurasia Group found that many of Xi’s policies, particularly “zero-COVID,” will stagnate the country.

Ironically, the supply chain disruptions caused by China will be felt everywhere, including in China; however, the rest of the world is looking for ways to circumvent the China supply chain while the country will continue to be mired in it.

China attracted a great deal of investment in 2020 and 2021 when the rest of the world was still under lockdown and dependent on China for manufactured goods. However, 2022 is seeing a reversal of roles as the rest of the world is getting back to work, whereas China continues to disrupt its economy with its “zero-COVID” policy.

This has resulted in a trend of shifting factory orders away from China, and this will most likely continue. Lawmakers in the United States, Japan, the European Union, Australia, and other major markets have increasingly cited overdependence on China as a threat to national security. They have been looking for ways to reshore manufacturing or diversify supply chains through friendlier nations, mainly Southeast Asia, India, and Taiwan.

The loss of foreign manufacturing will decrease China’s growth outlook and further weaken the yuan. The announcement of the People’s Bank of China to reduce the reserve requirements accelerated the decline in the value of the yuan, which fell 6 percent against the dollar between mid-April and mid-May.

In May, foreign investors reduced their holdings of Chinese bonds by $16 billion, with a total of $61 billion being sold off since February. New investment in China sovereign debt is unlikely to come soon as the yields on Chinese bonds continue to fall. At the same time, the yields on U.S. bonds are rising.

China is facing a major debt problem. National debt has reached 73 percent of GDP, and total debt was more than 250 percent of GDP in 2021.

Experts are not only eschewing central government debt, but also debt at the local government level, which is slipping into the red zone.

Arthur Lau, head of Asia ex-Japan fixed income at PineBridge Investments, was quoted in The Wall Street Journal on June 15, saying that he felt it was not the time to increase the company’s investments in China local government bonds.

Local governments are allotted a “special project” bond issuance quota, which is quickly being used up. Provincial and municipal governments generally earn money through land sales, but real estate remains flat this year.

With debt increasing and less revenue coming in, the second half of the year may present China with a “fiscal cliff.” The central government will have no choice but to continue to finance the debt of local governments, adding to China’s already staggering public debt.

The political environments of both the United States and China are further increasing the risk of investing in Chinese stocks and bonds, Chinese companies, and even setting up joint ventures in China.

Xi has been cracking down on tech and on the ability of foreign companies to list in U.S. exchanges. Alibaba was subjected to a $2.8 billion antitrust fine in China. Baidu and JD were also hit with fines, while Tencent was subjected to an investigation by Beijing. As for overseas listing, under the proposed legislation, Chinese companies will be required to register with Chinese authorities before launching an initial public offering overseas.

The CCP accused Didi, the Chinese ride-hailing app, of breaking several securities laws and threatened to ban the company from Chinese app stores. As a result, Didi’s New York IPO was a disaster, with share prices crashing. In December 2021, Didi announced its decision to delist.

As the CCP is targeting the Chinese tech sector, the United States is tightening its rules, making it more difficult for Chinese firms to list in America. Chinese firms will now have to meet the same audit requirements as firms from other countries. Additionally, they will have to disclose whether or not they are affiliated with the government or government entities.

As a result of regulations changing on both sides of the ocean, fewer Chinese tech companies, and fewer Chinese companies in general, are looking to list on U.S. exchanges. In February this year, Meihua International Medical Technologies became the first Chinese IPO in the United States since July 2021.

Meanwhile, China’s property and banking sectors are also under increasing scrutiny. Property developers Evergrande and Kaisa Group have both been teetering on the brink of default. Many analysts believe they are just the tip of the iceberg. Online brokerages Futu Holdings and UP Fintech Holding have both become the subject of government scrutiny, which may signal more restrictions in the financial sector.

The ripples caused by restrictions or defaults in these sectors will be felt throughout the entire Chinese economy.