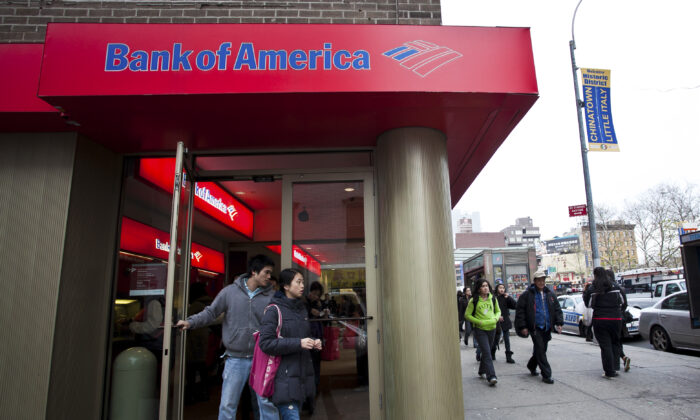 Bank of America announced a 4 percent drop in net income for the final quarter of 2019, while that of Goldman Sachs fell by 24 percent.

Investors, meanwhile, are eyeing numbers closely as the financial reporting season comes into full swing and income growth of firms listed on the S&P 500 in previous quarters has remained flat.

Stock markets have performed well despite near-zero corporate earnings growth, with many investors anticipating a turnaround in profits in 2020 as global growth stabilizes and trade tensions diffuse.

“The market rally indicates that investors expect higher earnings growth again in 2020,” Alexander Voigt, Founder and CEO at daytradingz.com, told The Epoch Times in an email. “The China trade deal and presidential elections are the main influential factors. I expect a stronger outlook during the current earnings release period and a subsequent higher earnings growth for 1Q20 and 2Q20,” he added.

“Analysts should curb their earnings enthusiasm,” said Max Gokhman, Head of Asset Allocation at Pacific Life Fund Advisors. “A dearth of capex in 2019 means that earnings targets will be hard to hit this year. Unless analysts make expedient downward revisions, we may see a correction as companies miss the high bar set for them by Wall Street,” Gokhman told The Epoch Times in an email.

Bank of America, the second-biggest U.S. bank by assets, said in a Jan. 15 press release (pdf) it earned $7 billion in net income in the fourth quarter, down from $7.3 billion in the final quarter of 2018.

Goldman Sachs also released its quarterly earnings report (pdf) on Wednesday, showing strong revenue numbers but a fourth-quarter net income drop to $1.92 billion, from $2.54 billion in the year-earlier period (pdf). This represents a 24 percent drop in profit between 4Q2018 and 4Q2019.

Total earnings in 2019 for Bank of America came in at $27.4 billion, adjusted down from $29.1 billion due to the impact of a non-cash impairment charge related to the notice of termination of a merchant-services joint venture, the bank said. Earnings in 2018 came in at $28.1 billion.

Analysts cited by Barron’s said the bank’s financial result, while down, was above Wall Street expectations.

“We also delivered for shareholders in 2019 by returning a record $34 billion in excess capital through dividends and share repurchases,” said Bank of America Chairman and CEO Brian Moynihan. “As evidenced by a quarter in which our customer deposits surpassed $1.4 trillion and client balances in our wealth management business topped $3 trillion, we enter 2020 with momentum.”

Shares of Bank of America rose 43 percent in 2019, but fell slightly following the announcement of the earnings report.

Earnings of the lending giant were first buoyed by nine interest hikes between 2015 and 2018, then buffeted by three cuts last year.

Higher rates benefit the bottom lines of deposit-taking financial institutions because they widen spreads between the interest banks earn from loans and the interest they pay for deposits.

“The company managed well through a period of transition from rising rates to lower rates over a short period of time,” said Chief Financial Officer Paul Donofrio. “Solid client activity in growing loans and gathering deposits helped us offset spread compression. We also are aided by diverse lines of business and operations, with noninterest income comprising nearly half of our revenue.”

While the bank’s consumer banking, global wealth and investment management, and global banking divisions all saw drops in revenue compared to the year-ago quarter, the bright spot was the global markets operations. This division saw revenue growth of 6 percent and net income growth of 13 percent for the final quarter of 2019.

“In a steadily growing economy marked by solid client activity, our teammates produced another strong quarter and year, allowing us to increase investments in our customers, communities, and employees, while keeping a close eye on expenses,” Moynihan said.

Goldman Sachs reported a bigger-than-expected fall in quarterly profit on Wednesday as the Wall Street bank set aside more money to cover legal costs for a corruption scandal, overshadowing a rebound in its trading business.

The bank set aside $1.09 billion in the fourth quarter ahead of an expected settlement that could touch $2 billion or more.

The legal woes come at a time when Chief Executive Officer David Solomon is launching a major shift in strategy away from trading—long its main profit engine—to the construction of a bigger consumer business that shields it from wild swings on financial markets.

“Strong performance in the fourth quarter helped us to deliver solid results for the year, while continuing to invest in new businesses. We aim to drive higher returns in the future, and look forward to sharing our strategic goals and financial targets at Investor Day later this month,” Solomon said.

The bank blamed the drop in net income on a 42 percent increase in operating expenses due to “significantly higher” compensation and provisions for litigation and regulatory proceedings.

“The increase in operating expenses compared with 2018 primarily reflected significantly higher net provisions for litigation and regulatory proceedings and higher expenses for consolidated investments and technology (increases primarily in depreciation and amortization, communications and technology, occupancy and other expenses),” the bank said.