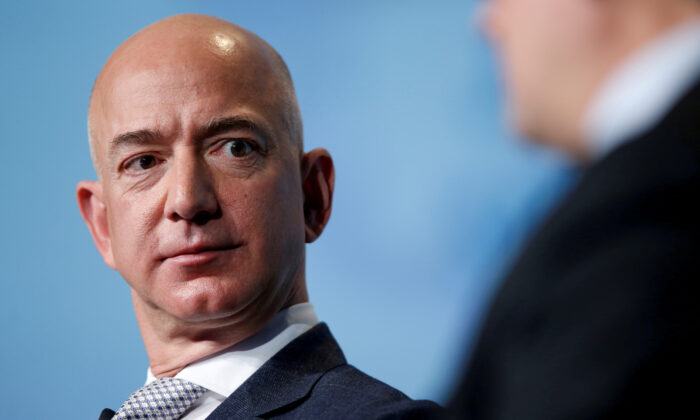 Jeff Bezos, founder and CEO of Amazon, speaks during an address to attendees at Access Intelligence's SATELLITE 2017 conference in Washington on March 7, 2017. (Joshua Roberts/Reuters)
US News

Investigators probing how sensitive information such as income figures was leaked to a news outlets have made referrals to the FBI, a tax official said this week.

“Treasury announced yesterday that they made investigative referrals to their Office of Inspector General as well as the FBI, and the United States Attorney’s Office for the District of Columbia,” Douglas O’Donnell, a deputy commissioner at the Internal Revenue Service (IRS), told a congressional committee in Washington on Thursday. “We fully support any investigation under taken and will urge the investigative authorities to keep Congress appropriately informed of their findings.”

IRS officials “want to know what happened, urgently,” he added. “We take this matter very seriously. And we’ll be pushing as hard as we can to ensure that we learn as soon as possible, what actually did happen.”

ProPublica published files that some of the wealthiest Americans, including Amazon founder Jeff Bezos and Tesla CEO Elon Musk, had submitted to the IRS as part of normal tax processes. It claimed the Americans paid a lower tax rate than those making less than them. The outlet said it did not know the source of the files.

IRS Commissioner Charles Rettig told a Senate panel earlier in the week that an investigation had been opened “with respect to the allegations that the source of that article came from the Internal Revenue Service.”

And White House press secretary Jen Psaki told reporters on Tuesday that the matter would be probed by the Treasury Department’s inspector general, as well as the FBI and the U.S. attorney for Washington.

“Any unauthorized disclosure of confidential government information by a person with access is illegal, and we take this very seriously,” she said.

“I can tell you that, broadly speaking, we know that there is more to be done to ensure that corporations, individuals who are at the highest income are paying more of their fair share, hence it’s in the president’s proposals, his budget, and part of how he’s proposing to pay for his ideas,” she also said.

Members of both parties in Congress have expressed concern about the source of the leak.

“We may have an illegal leak or a hack of private citizens’ tax return information,” Rep. Jerrold Nadler (D-N.Y.), chair of the House Oversight Committee, said during a hearing this week.

“This is a shocking breach of taxpayer privacy, and should cause all of us serious concern,” added Rep. Mike Kelly (R-Pa.).

Sen. Mike Crapo (R-Idaho), the top Republican on the Senate Finance Committee, said the leak undercut a recent proposal from the Biden administration that would force financial institutions to report more information to the IRS.

“I think that this proposal to literally increase the IRS ability to, in my opinion, violate the privacy and access to private financial information of individuals, in a manner that is far in excess of what currently exists, is of great concern,” he said. “How can the IRS assure Americans that the information it would receive under this proposal would be used for proper purposes and in light of the ProPublica information report we saw today?”

Rettig assured members that “we will find out” about the source of the information. Asked if the source would be prosecuted if a violation of law was found, he answered, “absolutely.”

“I share the concerns of every American for the sensitive and private nature and confidential nature of the information the IRS receives,” he said. “As you all are well aware, I spent 36 years on the outside. I think that trust and confidence in the Internal Revenue Service is sort of the bedrock of asking people and requiring people to provide financial information. And we have, as I said, turned it over to the appropriate investigators, external and internal.”