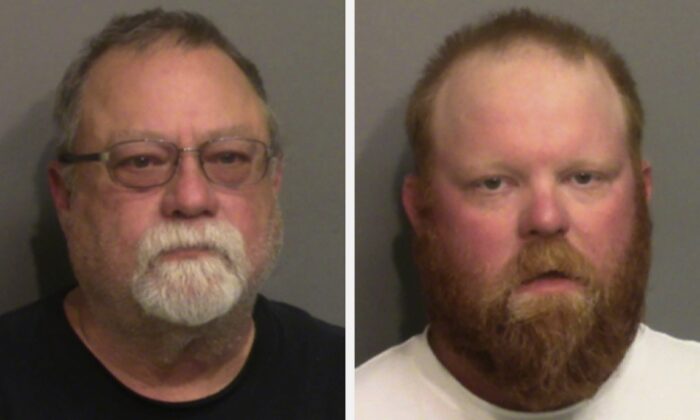 Gregory McMichael (L) and his son Travis McMichael on May 7, 2020. (Glynn County Detention Center via AP)
US News

Authorities in Georgia say they are reviewing new footage in connection to the death of Ahmad Arbery, who was killed while jogging in a Glynn County neighborhood in February.

“We are indeed reviewing additional video footage and photographs as part of the active case,” said the Georgia Bureau of Investigation in a statement Saturday. “It is important to note that this footage was reviewed at the beginning of the GBI investigation and before the arrests of [suspects] Gregory and Travis McMichael.”

Investigators have stated Travis McMichael, 34, and his father, Gregory McMichael, 64, shot and killed Arbery near Brunswick on Feb. 23. They were both denied bond at a May 8 court hearing, according to reports last week.

The case, after the video was released, sparked significant outrage on social media. The McMichaels were arrested late last week in connection to Arbery’s death.

The new footage, according to Fox News, shows a man who looks like Arbery walking down the street during the same afternoon he was killed. The man is seen walking into a garage that had been under construction, walking around the back, and then leaving within a few minutes. He’s not seen taking anything.

A lawyer for Arbery’s family said the new footage shows that he wasn’t involved in a crime.

“Ahmaud Arbery did not take part in any felony, had no illegal substances in his system, was not armed—yet was shot three times with a shotgun at close range,” a lawyer’s statement said, reported the Atlanta Journal-Constitution.

A witness called 911 around the same time to report a man was in her house that was under construction, the AJC reported. Minutes later, a caller told 911 that “there’s a black male running down the street,” according to the paper.

Georgia Attorney General Chris Carr said he will look into how the case was handled.

“The family, the community and the state of Georgia deserve answers. We need to know exactly what happened, and we will be working to find those answers,” Carr said in a statement obtained by CBS News.