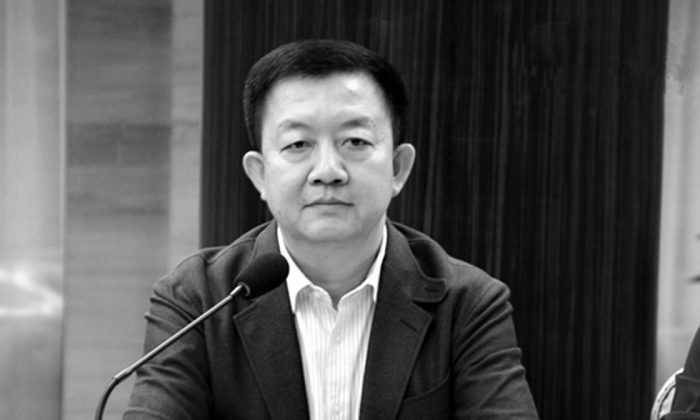 A 120-character announcement by Hunan’s anti-corruption agency on Nov. 17 seemed unremarkable, even innocuous—a sentence stating that Cheng Danfeng, the deputy mayor of the province’s Zhangjiajie City, was being investigated for a severe breach of Party conduct, and in three short lines, Cheng’s career biography as communist cadre.

But trace Cheng’s political patronage, and the downfall of the middling official becomes clear and consequential: Cheng is the latest cog in the political machine that Party leader Xi Jinping has spent the last three years of his anti-corruption campaign methodically dismantling.

This deeply entrenched power network was controlled by former leader Jiang Zemin, who held power formally until 2002 but extended his influence well into the reign of successor Hu Jintao.

Cheng Danfeng is the son-in-law of Su Rong, who holds the distinction of being the highest-ranking official to be purged while still in office, during the three-year anti-corruption campaign led by Party chief Xi Jinping.

Su Rong’s investigation by anti-corruption authorities on June 14, 2014, was particularly surprising to many observers at the time because he had made a public appearance only four days prior.

Su, formerly No. 2 of the Chinese People’s Political Consultative Conference (CPPCC), a Party organization that integrates noncommunist social groups, was later expelled from the Party on Feb. 16, 2015. The Central Commission for Discipline Inspection (CCDI) also announced that Su is due to stand trial for profiting from the sale of official positions and other discipline violations, but a court date hasn’t been set.

In turn, Su Rong is a known to be a close associate of Jiang Jiemin (not to be confused with Jiang Zemin) and Zhou Yongkang, two top Party officials who have been handed lengthy jail sentences—16 years and a life term, respectively—after being convicted of severe corruption this year.

Jiang Jiemin formerly helmed the Party agency that supervises state-owned companies, and before that, he made his fortune as a state-run petroleum and gas magnate. Zhou Yongkang once wielded immense power as head of the Chinese regime’s security and legal apparatus from 2007 to 2012.

The connection between the trio was hinted at obliquely in a June 2014 report on the popular Chinese Internet portal Sohu. Su Rong had apparently joined Jiang Jiemin and the latter’s “boss” in surveying various Chinese cities in 2005 and 2009. Later, Su and Jiang’s “boss” met again in the fifth plenary session of the National People’s Congress (NPC) in March 2012. Media in China often resort to epithets to refer to sensitive political figures, like Zhou Yongkang, mention of whom in the press is tightly circumscribed.

Zhou Yongkang was Jiang Jiemin’s superior while both were in the lucrative state-run energy sector, and both Zhou and Su were in attendance at the NPC plenary session on March 2012.

Su Rong also served as a key aide to Zeng Qinghong, the former vice president of China and the most important aide to former Party leader Jiang Zemin. From 2006 to 2007, Su was the executive vice principal of the Central Party School in Beijing, the Communist Party’s central institute where cadres receive political and ideological indoctrination. Zeng was then the Central Party School’s  principal.

The following year, Su was promoted to Party secretary of Zeng Qinghong’s native province of Jiangxi in southeast China, an appointment that was likely, in the Chinese political context, due to a recommendation from his former mentor.

Zeng Qinghong is not, however, the highest ranking Party official Su Rong enjoyed good favor with. For many years, Zeng himself served as consigliere to Party godfather Jiang Zemin. And Su is in Jiang’s good books, having played a key part in the former communist leader’s pet project: the persecution of Falun Gong.

When Su Rong was the deputy secretary of the Party Committee of Jilin Province from 1999 to 2001, he also headed up the province’s 610 Office.

The 610 Office is a Gestapo-like secret police agency set up to oversee the persecution of Falun Gong, a traditional Chinese spiritual discipline whose practitioners perform five sets of slow exercises and adhere to teachings of truthfulness, compassion, and tolerance. Jiang Zemin ordered Falun Gong “eliminated” on July 20, 1999, and mobilized the Chinese regime’s security machinery for the task.

At least 23 Falun Gong practitioners were killed—most of them tortured to death—in Jilin when Su Rong was in charge, according to the World Organization to Investigate the Persecution of Falun Gong, a research NGO focused on tracing the Chinese regime’s suppression of Falun Gong and identifying perpetrators of the persecution. Today, it has been confirmed from evidence that over 3,900 practitioners nationwide have lost their lives through torture and abuse, according to Minghui.org, a clearinghouse for information about the persecution. However, the actual number is estimated to be much higher.

Su Rong continued to attack Falun Gong when he was promoted to secretary of the Party Committee in Gansu Province in northwestern China in 2001. Three years later, Su was served papers in a civil lawsuit for torture, murder, and defamation of Falun Gong practitioners while he was visiting Zambia and had to flee the country through a bordering African nation with the assistance of the Chinese consulate.

With the purge of Su Rong—and Su’s son-in-law—as well as officials like Jiang Jiemin and Zhou Yongkang, Chinese leader Xi Jinping is expanding the scope of his purge of the Communist Party. Recent moves made against Jiang Zemin indicate that while scouring the lower rungs of this political network, Xi may also eventually target higher-level officials too.