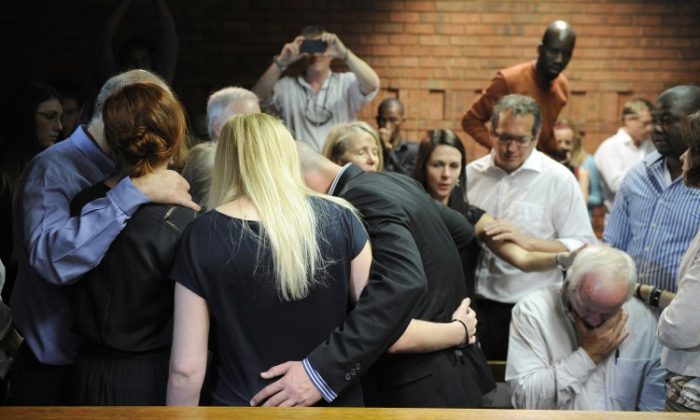 The father and other family members of Oscar Pistorius, South African Olympic sprinter who is set to be charged with murdering Reeva Steenkamp, comfort each other on February 19, 2013 after the athlete's bail hearing was adjourned at the Magistrate Court in Pretoria. (Stephane De Sakutin/AFP/Getty Images)
Africa

Oscar Pistorius is closer to being charged with pre-meditated murder, as more evidence and more details on the tragic murder of his girlfriend, Reeva Steenkamp, are being presented in court. Testosterone was found in Pistorius’s home and a witness at the scene is being questioned.

Every detail in the case is being reported from the courtroom minute-by-minute by live blog feeds and tweets on Twitter.

@barrybateman tweets from inside the courtroom, “Roux is asking the court to extend his client’s stay at the Brooklyn Police Station.#OscarPistorius” Finally, he tweets on Feb. 20 at 2:45 p.m. local time, “#OscarPistorius and that’s it. Back tomorrow at 11am for argument.”

“#Pistorius has stopped crying since defense case starts going well. Were the tears for himself or for Reeva?” tweeted Guardian reporter @SadhbhWalshe at approximately 3 p.m. local time.

“Lots of evidential testimony is currently being made by the state during today’s court proceedings which are contradicting Oscar’s statement yesterday,” reads a blog post on Wednesday from Africa’s Mail & Guardian live blog on the case.

According to an investigation by Hilton Botha, the guardian chief investigator in the case, his investigation found that Pistorius knew Steenkamp was in the bathroom at the time of the shooting, according to Mail & Guardian.

Steenkamp was shot and killed in the bathroom of her boyfriend’s home on Feb. 14. Pistorius told the court on Tuesday that he shot Steenkamp through a locked bathroom door thinking that she was an intruder.

“We were deeply in love and I could not be happier. I know she felt the same way,” Pistorius wrote in his affidavit.

Botha took to the stand and said that based on the angle of the shots, Pistorius had to have his prosthetic legs on when he fired. In Pistorius’s affidavit he said that he did not have his legs on.